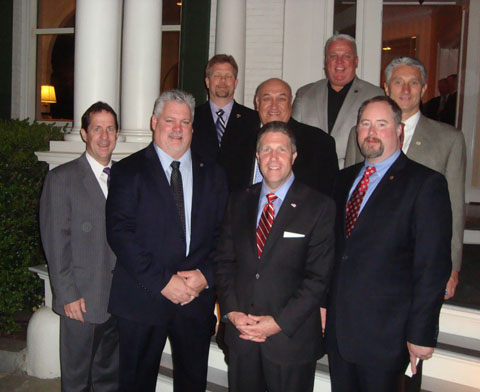 NAPO is appreciative for the Administration's commitment to state and local law enforcement. We are especially grateful to the Vice President for his longstanding and positive relationship with NAPO and its members.

Each year members of Congress circulate "Dear Colleague Letters" asking members to financially support specific programs.  NAPO served as the law enforcement leader in efforts to work in a bipartisan fashion in both chambers to advance key funding priorities for rank-and-file.

As strong advocates for the COPS Hiring Program, and the Byrne JAG competitive grant program NAPO worked with Representatives Dave Reichert (R-WA) and Bill Pascrell (D-NJ) in circulating a Dear Colleague Letter that supports both programs. This letter exceeded last year's level of support by increasing signatures from 26 members to a total of 143 Representatives in support of funding for COPS Hiring and Byrne JAG.

In the Senate NAPO worked with staff to circulate three funding letters in support of the COPS Hiring and Byrne JAG programs.

The first, by Senator Robert Menendez (D-NJ), advocates for both the COPS Hiring Program and the Byrne JAG program to be funded at the level specified in the President's Budget request. Senator Menendez's letter also calls for support of President Obama's legislative proposal to create a COPS stabilization fund to rehire or prevent the lay-offs of public safety officers.  This was the first year for a Dear Colleague Letter to strongly support all three priorities. As a result 28 Senators signed in support.

The third, a bipartisan letter by Senators Maria Cantwell (D-WA) and Chuck Grassley (R-IA) addresses Byrne JAG only. This letter requests that funding not be reduced for the Byrne JAG program again this year and had the support of 42 signatures, an increase of 3 Senators.

NAPO's efforts, in combination with our memberships outreach resulted in a stronger position for key funding programs to receive appropriations. Congress is expected to mark-up CJS appropriations within the next few weeks. NAPO will continue to provide updates throughout this process.

The action of excluding healthcare from collective bargaining negotiations is without precedent and is at odds with the long history of public sector bargaining in New York. If the Port Authority is permitted to place negotiations over health care off limits, there will be far reaching effects that could fundamentally change the rights of every member of a union in New York.

NAPO sent a letter to Governor Cuomo of New York requesting a veto to the amendment by the Port Authority Board of Commissioners. A copy of this letter can be found on NAPO's website.

Legislation addressing Federal consent decree fairness has periodically been reintroduced throughout different years of Congress. NAPO has been, and continues to be an advocate for the Federal Consent Decree Fairness Act, (H.R. 3041) introduced by Representative Jim Cooper (D-TN). The Federal Consent Decree Fairness Act would allow any state or local government or related official to file a motion to modify or terminate a federal consent decree.

Consent decrees can be a remedy for the violation of rights and a tool for protecting a party who faces injury. They should not be used to further any policy that is extraneous to the protection of those rights or expanded to apply to parties not involved in the litigation. State and local governments have found their interests and judgment in managing their own affairs trampled on by the federal courts in the structuring of consent decrees.

There is a tendency for consent decrees to take on a life of their own and to last longer than the period of time necessary. These impose heavy costs on the agencies involved and affect the services they provide to the public.

NAPO supports efforts to limit the length of consent decrees and to protect the interests of state and local governments in managing their own affairs.

In 2004, President Bush signed into law the Mentally Ill Offender Treatment and Crime Reduction Act (MIOTCRA).  Congress reauthorized MIOTCRA in 2008 for an additional five years and also expanded training for law enforcement to identify and respond appropriately to individuals with mental illness as well as support the development of law enforcement receiving centers to assess individuals in custody for mental health and substance abuse treatment needs.

Rank-and-file officers are often the first point of contact within the communities; therefore they have first-hand experience on the impact of mentally ill offenders to society. Law enforcement officers can be left with difficult choices that can sometimes lead to avoidable injuries to either party.

In March, NAPO attended a briefing on "Improving Law Enforcement Response to People with Mental Illness" and has continued to work with our colleagues within the justice community to raise awareness in support of this program. If you would like additional information please contact NAPO's Director of Government Affairs, Rachel Hedge.