As 2012 comes to an end, there are several issues commanding attention in Washington that will have a large impact on state and local law enforcement.  We'd like to discuss three of them here:  Sequestration (or "The Fiscal Cliff"); The White House summit on gun violence, and expected changes in the new, 2013-15 Congress. 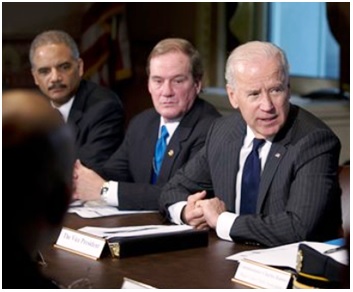 On Thursday, December 20, NAPO National President Tom Nee helped lead a panel of distinguished law enforcement professionals at a White House meeting convened by President Barack Obama and chaired by Vice President Joe Biden.  Attorney General Eric Holder also helped lead the meeting.  The immediate impetus for Thursday's meeting was the horrific school shooting in Newtown, Connecticut the week before.  But even prior to this most recent incident, NAPO has been recognized as one of the nation's leaders in the comprehensive effort to make both officers' and citizens' lives safer.  For example, when the administration first spoke about the terrible Aurora, Colorado theater shooting last July, it was Vice President Biden who chose the annual NAPO convention to address the issue.  Prior to Thursday's meeting, NAPO Executive Director Bill Johnson held discussions with both Vice Presidential and White House staff regarding response to, and prevention of, these incidents.   As President Nee emphasized at the White House meeting, NAPO urges four related and coordinated public policy responses:

NAPO urges all people of good will to come together to address these critical issues, for the sake of our communities, our nation, and especially our young people.

NOMINATE AN OFFICER FOR
THE TOP COPS® AWARDS!

AT THE OMNI SHOREHAM HOTEL

IN CONJUNCTION WITH NATIONAL POLICE WEEK

It is that time of the year again!  We are trying to generate as many quality TOP COPS® nominations as possible.  Please consider nominating a fellow officer.  We would appreciate you sharing this form with colleagues and friends in law enforcement. Feel free to post the attached nomination form wherever you feel it appropriate.  The nomination form is also available in PDF format on our website (www.napo.org) or click here.  Help us ensure that all states and territories are represented at the 20th Annual TOP COPS Awards® Ceremony.  The deadline for nominations is January 11, 2013.

NAPO proudly introduces The 25th Annual Police, Fire, EMS, and Municipal Employee Pension & Benefits Seminar scheduled for February 17 -19, 2013 Las Vegas, Nevada at the Encore at Wynn Hotel. The goal of this event is to educate your members of pension and union representatives along with their providers on the latest issues surrounding the pension and benefits industry.

New this year, NAPO is teaming-up with Opal Financial Group to improve the Pension & Benefits Seminar. The seminar is spotlighting key issues you want to know about, including reducing healthcare costs in the midst of new regulations, revising your asset allocation strategy, responding to DB versus DC plan debate, the outlook nationally and internationally on a new presidential administration, realistic projections of earnings and assumption rates, preservation of assets, and much more.

"For form, please see PDF version of this Washington Report"