Democrats Walk Away from Police Reform Negotiations;NAPO Fights Back Restrictions to the 1033 Program; DOJ Implements Guidelines on Use of Monitors in Consent Decrees;NAPO on the Hill: Fentanyl Scheduling; NAPO on the Hill: HELPS Retirees Fix; NAPO in the News; NAPO’s Legislative Positions & Sponsor/Cosponsor Updates

Bipartisan police reform negotiations appear to be dead as the lead Democrat negotiators, Senator Cory Booker (D-NJ) and Representative Karen Bass (D-CA), walked away from negotiations with Senator Tim Scott (R-SC) on September 21 after not being able to come to a final deal after months of negotiations.  Discussions seemed to be stuck on the same issues – qualified immunity, the Department of Defense 1033 Program, the use of chokeholds, no-knock warrants, and certification and accreditation for law enforcement officers and agencies – without any sense of being able to reach an agreement on legislative language.

Rep. Bass appeared to place most of the blame on the inflexibility of police unions for negotiations failing, but speaking for NAPO, we were open to the goal of many of the proposals around the use of force, no-knock warrants, the 1033 program, and accreditation and certification, amongst others, as long as officers’ rights were protected.  NAPO’s priorities throughout this process have been to safeguard the individual rights of officers. We were working to protect qualified immunity and other long standing, constitutional good faith legal protections for officers, ensure officer due process is protected, officer privacy and confidentiality rights are guarded, and the rights of law enforcement to bargain over accountability and disciplinary actions are not eroded.  Unfortunately, protecting officers’ rights was not a priority for Democrat negotiators.

Senator Scott was not willing to use critical Department of Justice grant programs as a stick to beat state and local law enforcement agencies into compliance and stated that was a significant reason for him not agreeing to the Democrats’ latest proposal.  NAPO strongly believes that state and local law enforcement grant programs must be used to incentivize, not defund.  We thank Senator Scott for always being willing to listen to our concerns.  Democrats seemed determined to walk away even though Senator Scott was still a willing participant and progress was being made.

With bipartisan police reform apparently dead and the George Floyd Justice in Policing Act not going anywhere in the Senate, Democrats are sure to try to pass partisan reform provisions through other pieces of legislation.  NAPO will be monitoring any and all major pieces of legislation where police reform provisions could be included to ensure nothing gets passed surreptitiously.

NAPO Fights Back Restrictions to the 1033 Program

NAPO opposed and actively worked to defeat this amendment and sent a letter to every member of the House, including leadership, advising them of our strong opposition to amending the NDAA to limit our access to this life saving equipment.  The defeat of this amendment is a significant win in the House which has passed the same restrictions to the 1033 Program proposed in this amendment as part of the George Floyd Justice in  Policing Act.

Restricting access to this equipment will endanger the lives of police officers and the civilians they are sworn to protect.  NAPO will continue to work to protect the 1033 Program as the NDAA moves its way through the Senate.

DOJ Implements Guidelines on Use of Monitors in Consent Decrees

Attorney General Merrick Garland released a memo to United States Attorneys on September 13 regarding new principles and guidelines for the use of monitors in civil settlement agreements and consent decrees.  The guidelines contained in the memo are based on a Departmental review of the use of monitors and discussions with stakeholders by Associate Attorney General Vanita Gupta and her staff.  NAPO participate in this process that culminated in a meeting with Associate AG Gupta’s office on June 11.  While most of our recommendations were not taken into account in this memo, the Attorney General did consider two of our suggested changes to monitorship: presumptive term limits and banning double dipping by monitors.  These two principles will help ensure impartiality and fairness in evaluating the provisions of a consent decree and protect the interests of state and local governments in managing their own affairs.

If your department is under a consent decree, we urge you to actively participate in any outreach the DOJ or the monitor conducts to the “community” to ensure your voices are heard.

NAPO will continue to work with Associate Attorney General Gupta, Assistant Attorney General Kristen Clarke and the Civil Rights Division as the Department implements these guidelines and work to improve the consent decree process.

NAPO on the Hill: Fentanyl Scheduling

The Drug Enforcement Agency’s (DEA) temporary classwide scheduling of all fentanyl-related substances as Schedule 1 drugs under the Controlled Substances Act - making them illegal - expires on October 22.  An end or even a lapse in this scheduling will threatened law enforcement’s efforts to fight fentanyl and similar opioids that are scourging communities across the country.  The classification of fentanyl as a Schedule 1 substance is necessary for all law enforcement actions on fentanyl, allowing law enforcement to prosecute criminals who make and distribute the drug.

This nation is experiencing a significant drug crisis, which threatens the future of our youth and our country as a whole.  According to the National Institute on Drug Abuse, 70,630 Americans died from drug overdoses in 2019 and opioids were involved in over 49,860 of those deaths, a significant increase in opioid-related overdose deaths over previous years. Many of these deaths were from using synthetic analogues of fentanyl.

NAPO supports a permanent solution to dealing with fentanyl in order that we do not have to continue to fight to keep these dangerous drugs scheduled.  We are working with Senator Charles Grassley (R-IA), Ranking Member of the Senate Judiciary Committee, and our national law enforcement partners to achieve a permanent solution to meets the needs of law enforcement, the victims of fentanyl, and criminal justice reform advocates. Together with eight other national law enforcement organizations, NAPO sent a letter to Senator Judiciary Committee Chair Richard Durbin (D-IL) and Ranking Member Grassley urging them to come together to pass legislation that permanently schedules fentanyl-related substances.

While we work to achieve a permanent solution, the House passed a continuing resolution on September 21 to fund the government through December 3 that included a temporary extension of fentanyl’s status as a Schedule 1 drug until January 28, 2022.  There is bipartisan support for this provision in the Senate, so we expect the extension to pass with the continuing resolution.

NAPO, together with our public safety pension partners, is working on introducing legislation that would enhance and address issues with the HELPS Retirees provision of the Pension Protection Act of 2006. We spoke with staff of Representative Jimmy Gomez (D-CA), who is leading the effort to introduce this bill in the House, on the status of the bill and what support we can expect from the House Ways and Means Committee, of which Rep. Gomez is a member.

The HELPS Retirees provision provides public safety officers, who often retire earlier than other occupations because of the physical demands and unique job hazards they face, with means to more affordable healthcare options. This is important as many law enforcement retirees lose their employer-provided health insurance and are years away from being Medicare-eligible, forcing them to spend their retirement money on health insurance premiums.

Since the enactment of the HELPS Retirees provision in 2006, health care costs have gone up dramatically and the $3,000 per year permitted under the provision is no longer adequate to cover even half a year’s worth of health insurance premiums.  In this legislation, the amount public safety retirees can take out of their pensions tax free to pay for health or long-term care insurance premiums would increase from $3,000 per year to $6,000 per year and it would be indexed to inflation to ensure the benefit keeps up with the rising costs of healthcare.

To qualify for the HELPS Retirees provision, a public safety officer must have attained normal retirement age or retired due to a disability and has insurance premiums deducted from their retirement benefit.  The money must go directly from the pension fund to the health or insurance company in order to get the tax-free benefit. Unfortunately, due to the administrative burden of this direct payment requirement, many public pension plans, particularly small plans, have not implemented this important provision.  For retirees to benefit from HELPS, the pension plan must pay the money directly to the insurer – it does not go to the retiree. In states and localities that do not provide retiree healthcare that can mean hundreds of different insurance plans that must be tracked.  To address this issue, the bill NAPO is proposing would repeal the direct payment requirement, making it easier for public pension plans to implement the HELPS Retirees provision.

Rep. Gomez’s staff is working closely with the staff of Senator Sherrod Brown (D-OH) on developing this legislation and is confident that we will be able to move it this Fall after Congressional Democrats pass their infrastructure and reconciliation packages.  NAPO believes this legislation would help preserve the retirement security and the health of those public servants who selflessly serve and protect our communities and we are committed to seeing this proposal pass this Congress.

NAPO Executive Director Bill Johnson was quoted in a September 11, 2021 Associated Press article entitled, “Unions split on vaccine mandates, complicating Biden push”.  The article focused on the split among labor organizations after President Biden announced his proposed vaccine mandate on employers with more than 100 employees. While this mandate focuses on the private sector, many state and local governments have moved to mandate vaccinations for public employees, including law enforcement.

Bill Johnson, executive director of the National Association of Police Organizations, said police officers are reacting like most Americans. “You've got, like in the rest of the country, really strong feelings on both sides,” Johnson said.

Still, police unions can see the writing on the wall — and want any mandates to be negotiated through the collective bargaining process, Johnson said. “There's a sense from the union perspective that vaccination policy is pretty much going to be mandated,” he said. “We want a place at the table when we discuss implementation.”

NAPO will continue to ensure our members’ voices are heard loud and clear on the Hill, with the Administration, and in the media. 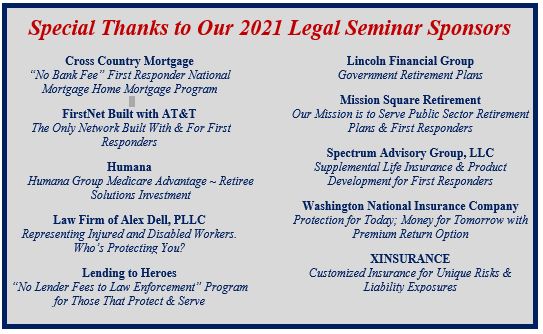