A series of amendments were offered to the House Commerce Justice and Science Fiscal Year 2013 appropriations bill. Two significant amendments to programs that directly benefit rank-and-file were among them.

The first was an amendment sponsored by Congressman Michael Grimm (R-NY) that would increase funding to COPS Hiring to FY12 levels ($166 million for COPS Hiring, an increase of $126 million). This measure was narrowly adopted by a 206 to 204 vote. The offset for these funds were taken from NASA. Please click here to see how your Representative voted.

The second was an amendment sponsored by Jon Runyan (R-NJ) to bring Byrne JAG funds up to the Senate level of $392 million. Funds for this were taken from the general administration account of DOJ. The vote passed 325 to 81; please click here to see how your Representative voted.

Although the Senate Appropriations Committee passed FY13 CJS funding bill, it still needs to be considered by the full chamber. The Senate bill includes $215 million for the COPS Hiring program and $392 million for Byrne JAG. After Senate passage, both chambers will need to conference for a final bill. This phase of the process will be contentious as the Senate and the House are working under different spending limits.

NAPO's lobbying efforts on Capitol Hill resulted in positive outcomes for both COP Hiring and the Bryne JAG programs. We will continue to work towards final passage of these important bills and will keep our members abreast of all pertinent developments.

On May 15, 2012, the House of Representatives overwhelmingly passed the National Blue Alert Act of 2012 (H.R. 365). The vote was supported by 394 Representatives and opposed by 1 member, Representative Justin Amash (R-MI). NAPO is working closely with the office of Senator Ben Cardin (D-MD) office, the sponsor of the companion bill in the Senate to pass this legislation into law.

It is difficult to determine which Senator objected to the National Blue Alert or why. NAPO is working to dispel funding discrepancies between the House and Senate bills. Senator Cardin is now promoting the House version of the bill; which doesn't authorize any spending and is not a federal mandate.

NAPO is optimistic members of the Senate will come to a resolution that will result in final passage of the National Blue Alert. We are continuing to leverage our contacts on Capitol Hill to secure passage of this important officer safety bill. If you have any questions please contact NAPO's Director of Government Affairs, Rachel Hedge.

FOR A CAPITOL HILL PRESS CONFERENCE 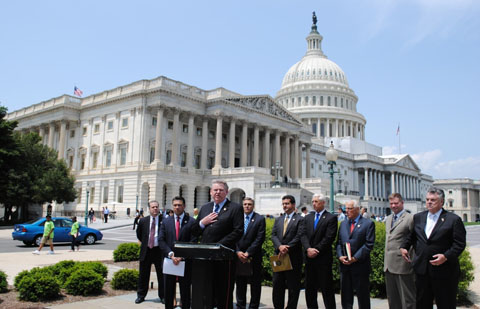 Many members gave remarks on their dedication to law enforcement and honored fallen police officers. They also highlighted recent passage of the National Blue Alert (H.R. 365), and the COPS Hiring amendment which restored $126 million to the COPS Hiring Program.

NAPO's own Tony wieners also gave remarks. "The need for Congress to invest in the law enforcement community is now more critical than ever before.

Public safety, the lives of our families and friends, is being adversely affected by the cuts to funding brought upon by budget reductions and shortfalls. A primary responsibility of the Federal Government is the protection of its citizens. Lacking adequate funding, law enforcement has been asked to do more with less. This is a dangerous and unsustainable path.

The reality of the situation is clear; less funding means fewer officers protecting our communities. Funding for the COPS Hiring Program goes directly to law enforcement departments and can immediately be used to hire police officers. Together, the COPS Hiring Program and the Byrne JAG Program provide resources for the entire criminal justice system."

The Public Safety Officers' Benefits (PSOB) Act was designed to offer peace of mind to the men and women who seek careers in public safety. This important legislation makes a strong statement about the value America places on the contributions of those who serve their communities in life-threatening circumstances.

The families of public safety officers who have fallen or have become disabled in the line of duty rely on the benefits promised to them by the PSOB.  This however, was not the case for the family of Officer Kenneth Santucci.

Officer Santucci and his partner, Officer Melissa Corrado, were on duty in a police vehicle when they responded to a suspicious person call. Their vehicle was struck by another vehicle. The second vehicle was driven by a civilian who had run a stop sign. Officer Santucci was killed in the accident.

NAPO became aware that some of  the individuals within the PSOB program who had the authority to grant benefits believed that Officer Santucci's driving could be interpreted as  grossly negligent, a characterization NAPO completely disagreed with.  If this opinion was allowed to go forward unchallenged, the Santucci family could be denied benefits under the law.

NAPO became directly involved in this case. We reached out to the Administration and worked to prevent a terrible miscarriage of justice. Several other groups, notably the New Jersey State PBA, and Concerns of Police Survivors also spoke out strongly on behalf of the family.

The claim for final approval of PSOB benefits for the Santucci family was granted on May 14, 2012 as a direct result of NAPO's actions.  Finally, after three and half years of delay, the Santucci family is getting the assistance promised to them.  NAPO is proud to work on the behalf of the Santuccis and for all rank-and-file law enforcement officers and their families.

The Senate Judiciary Committee approved by voice vote Senator Leahy's bill, The Bulletproof Vest Partnership Grant Act of 2012, S. 2554. This legislation will authorize $15 million for the BVP grant program for FY13 and FY14. It authorizes $30 million per year for FY15 through FY17. It also calls for Department of Justice to dispense previously obligated but undisbursed funds. This must be done before the end of FY14, otherwise the money will be transferred to the General Fund of the Treasury.

Passage of this legislation is critical, as the current authorization expires at the end of FY12. The BVP Grant requires vests to be uniquely fitted to each officer. This is an issue that NAPO addressed when we submitted testimony on the program earlier this year. A companion bill has been introduced in the House by Representative Frank LoBiondo (R-NJ), H.R. 5742.

THE COALITION AGAINST BIGGER TRUCKS THANKS NAPO 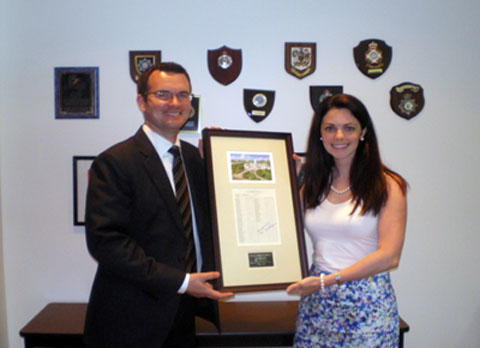 The Coalition Against Bigger Trucks (CABT) recognized NAPO for our support and successful efforts to protect motorist and preserve our highway infrastructure by maintaining sensible limits on the size and weight of trucks.

NAPO opposes The Safe and Efficient Transportation Act of 2011 (H.R. 763) because heavy trucks are a threat to public safety. These trucks cause tremendous amounts of damage to our highway infrastructure and leave taxpayers with the burden of fixing the roads.

Police officers are immediate responders to truck accidents and know well the amount of damage a tractor-trailer can do to an automobile and its occupants; especially at high speeds on interstate highways.  Allowing trucks to become longer and heavier will only endanger those who share the roads with them.

Increasing the size or weight of trucks could result in a negative impact on public safety. NAPO is proud to work with the Coalition Against Bigger Trucks to protect the interests of all our citizens as well as rank-and-file.

NPAO is proud to announce that Gary Blankinship, who served as Area Vice President for NAPO and as President of the Houston Police Officers' Union, has been nominated by President Obama to serve as the United States Marshal for the Southern District of Texas. Click here to read NAPO's letter in support of his nomination.

A SPECIAL THANK YOU TO OUR TOP COPS® SPONSORS

NAPO would like to express our sincere gratitude to all of our generous sponsors! Without the sponsorship of the following companies and organizations TOP COPS® would not be possible.

Please join NAPO for our 34th Annual Convention July 21 – July 25, 2012 at the Ritz Carlton in Palm Beach, Florida.  The registration form is available here.  Please start making your hotel and travel arrangements and if you have any questions, the NAPO office will be happy to assist you.  To book your hotel, please call 888-856-4273.  In order to receive the special reduced NAPO rate please make reservations by June 26th. We look forward to welcoming you in Palm Beach this summer!