NAPO hosted a Congressional Luncheon on Capitol Hill on May 13, 2014 to honor members of Congress who have been supportive of the law enforcement community.  NAPO was most appreciative that Senator Al Franken (D-MN) attended the luncheon to receive his award.

Since joining the Senate, Senator Franken has strongly supported legislation to help the law enforcement community. For example, he authored the Justice and Mental Health Collaboration Act, which would address the mental health crisis in our justice system, and he’s backed several bills to help keep police officers safe.

“Law enforcement is the first line in keeping our communities safe,” said Senator Franken. “And we need to be doing everything we can to ensure that law enforcement officers get to go home to their families at night. I’m honored to accept this award from the National Association of Police Organizations, and I look forward to continuing our work to help law enforcement in Minnesota and across the country.”

NAPO looks forward to working with the aforementioned members of Congress and Congressional staffers to ensure our priorities remain at the top of the Congressional agenda.

The award ceremony was followed by remarks from COPS Office Director Ron Davis.  NAPO has a strong relationship with the COPS Office, and we have already had several opportunities to discuss NAPO’s priorities with Director Davis.  NAPO members appreciated the Director’s insight.  We look forward to continuing to work with the Director and his talented staff. 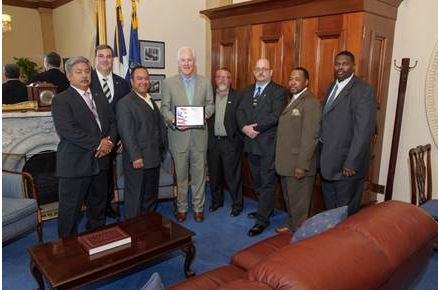 On May 13, 2014, NAPO presented an award to Senator John Cornyn (R-TX) to honor him for his outstanding support of the law enforcement community.  NAPO’s Executive Director, Bill Johnson, and our member groups, the Combined Law Enforcement Associations of Texas and the Postal Police Officers’ Association presented Senator Cornyn with the award in the Senator’s Capitol office.  During the meeting, NAPO recognized the Senator’s work on the Line of Duty Act, human-trafficking prevention legislation, and legislation like the Justice for All Reauthorization Act to support the use of forensic science testing in investigations.

NAPO looks forward to continuing to work with Senator Cornyn and his staff on these important initiatives.

Justice for Victims of Trafficking Act

As reported in previous Washington Reports, the Justice for Victims of Trafficking Act (H.R. 3530), as amended, recently passed unanimously out of the House Judiciary Committee.  The bill will be considered on the House floor on May 20th, along with four other anti-trafficking bills.  NAPO has worked closely with the bill’s sponsor, Congressman Ted Poe (R-TX), on this legislation, which:

NAPO will keep our members updated on the status of this important piece of legislation.  If you have any questions about this bill, please contact Melissa Nee at:  mnee@napo.org.

During the hearing, both Chairman Leahy and Ranking Member Charles Grassley (R-IA) highlighted their support of the bill, which holds strong bipartisan support.  The hearing also included testimony from Yousry Zakhary, Chief of the Woodway, Texas Police Department, who was saved by a bulletproof vest.

On May 6, 2014, Senator Leahy made a floor speech seeking unanimous consent to reauthorize the Bulletproof Vest Grant Program, in which he mentioned NAPO as a supporter of the bill.  He continued this sentiment during the hearing, stressing that “For over 15 years, the Bulletproof Vest Partnership Program has been saving lives by helping to provide over one million vests to over 13,000 local law enforcement agencies.  It is a critical program that I know every single law enforcement officer in the room today supports.”

Following the hearing, Senator Leahy again went to the Senate floor seeking unanimous consent to reauthorize the Bulletproof Vest Partnership Grant Program Reauthorization Act.  Senator Ben Cardin (D-MD) also sought unanimous consent for the Senate to take up and pass the National Blue Alert Act, which is currently backed by a bipartisan group of more than two dozen Senators.  The National Blue Alert Act would help to establish a nationwide network to alert law enforcement, the public, and the media about a suspect connected with the death or injury of a law enforcement officer.  (Senator Cardin highlighted NAPO as a supporter of the bill during his floor speech).   Senator Tom Coburn (R-OK) objected to both requests.

NAPO plans to continue to aggressively pursue the passage of both of these bills, which are vital to the law enforcement community.  Please contact your members of Congress today to ask them to support these vital pieces of legislation.  If you have any questions, please contact Melissa Nee at:  mnee@napo.org.

On May 15, 2014, the Senate passed a resolution (S.Res.449) commemorating and honoring the dedication and sacrifice of the Federal, State, and local law enforcement officers who have been killed or injured in the line of duty. During his floor statement, Senator Patrick Leahy (D-VT) noted:

“This week is National Police Week, a time when thousands of law enforcement officers come to our Nation’s

Capital, and we pause to honor the sacrifices of our men and women in law enforcement. On Tuesday night the

“This resolution pays tribute to those who have fallen, recognizing May 15, 2014, as “National Peace Officers

Memorial Day” and calling on the people of the United States to observe that day with solemnity, appreciation,

“I also urge the Senate to come together to honor law enforcement officers by supporting the passage of both S.933, the Bulletproof Vest Partnership Grant Program, and S. 357, the National Blue Alert Act. These bills are unanimously and strongly supported by law enforcement and passing these bills would provide tangible, life-saving assistance to those who serve on the front lines, protecting our communities.”

NAPO pledged our support for this resolution.  Also, as noted above, NAPO plans to continue to aggressively pursue the passage of the Bulletproof Vest Partnership Grant Program Reauthorization Act and the National Blue Alert Act.

On May 13, 2014, Congressman William Keating (D-MA) recognized the twenty-one law enforcement officers from Massachusetts honored by NAPO during our 21st Annual TOP COPS Awards.  During his floor statement, the Congressman noted:

“Many of these officers were on duty during the Boston Marathon bombings last year, and the search for the perpetrators that followed the bombings. These courageous men embody the best ideals of our country, and have dedicated their lives to our security.”

On May 12, 2014, Senator Amy Klobuchar (D-MN) spoke on the Senator floor in support of the Energy Savings and Industrial Competitiveness Act of 2014, and highlighted her support of the Metal Theft Prevention Act.  During her speech, Senator Klobuchar outlined the tenets of the Metal Theft Prevention Act, which has been filed as an amendment to the energy efficiency bill.  Senator Klobuchar recognized NAPO as a supporter of this bill.

NAPO looks forward to continuing to work with Senator Klobuchar and her staff to ensure the legislation is passed.  If you have any questions about the Metal Theft Prevention Act, please contact Melissa Nee at:  mnee@napo.org.