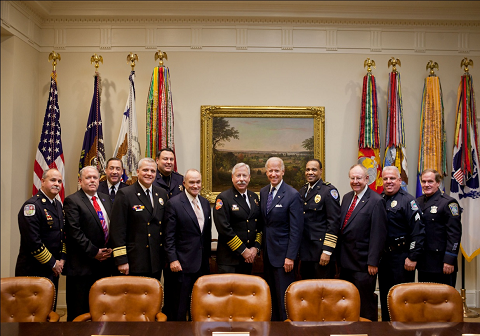 As part of the recent payroll tax deal the allocation of spectrum, known as the D Block will be given to public safety.

After months of debate, Congress reached an agreement on a long-term unemployment extension, a reimbursement rate to physicians treating Medicare patients and an extension of a payroll tax cut through the end of the year. The legislation, H.R. 3630 was formally introduced on February 16th and was signed into public law on February 22nd.

Prior to the President signing H.R.3630 into public law, NAPO President Tom Nee and Vice President Mick McHale were invited to join Vice President Biden in the White House on Tuesday, February 21st for a meeting to discuss the plan to build out the public safety network. NAPO was the only rank-and-file organization of the eleven members of the law enforcement community in attendance.

NAPO's inclusion in the meeting signified the recognition of our dedication to law enforcement as evidenced in our hard work for the passage of a nationwide interoperable public safety network.

Of particular importance to NAPO members is the creation of a nationwide, interoperable broadband network for public safety. Since the recommendations of the 9/11 commission, NAPO has been working to advance rank-and-file's position on this critical issue and we continue to advocate for the creation of a national interoperable broadband network for first responders. NAPO has been working to advance this network by working with members on Capitol Hill and within the Administration. We applaud the members of the conference committee for reaching an agreement and providing necessary resources to first responders.

This legislation gives the Federal Communications Commission (FCC) the authority to auction off unused or underutilized broadcast spectrum, thus raising revenues to offset the cost of the three spending provisions referenced above. This bill provides that as much as $7 billion will be set aside from spectrum auction proceeds for building out the First Responder Network on the 700MHz D Block.

In addition to providing $7 billion for the advancement of the D Block build out, the legislation also addresses several other areas of concern to NAPO members. The first of which is governance of the network. The National Telecommunications and Information Administration (NTIA), part of the Department of Commerce, will oversee the newly created "First Responder Network Authority" (FirstNet). This allows for a national approach and a set of standards for the network. Additionally, the legislation authorizes the creation of formal Advisory Committees which will allow first responder to directly influence the governance of the new network. Further, states will have the opportunity to opt-out of FirstNet, but they will still be held accountable to meet minimum, nationwide standards.

The legislation favorably resolves the Narrow Band issue: public safety will be allowed flexible use of the narrowband (subject to the FCC) rather than being forced to give up use of that spectrum as proposed in an earlier draft. However, the T-Band spectrum, currently utilized by some public safety entities, must be returned to the FCC for re-auction no later than 9 years after the enactment of legislation.

In crafting this deal the House majority made major concessions and ultimately delivered what public safety needs. NAPO recognizes these efforts and is also grateful for Senator Rockefeller's leadership on S. 911.

First responders will soon benefit from the implementation of a nationwide, interoperable broadband network due to the leadership of the President and the Vice President's continued commitment.

NAPO's work on this issue is not complete. We will continue to join the Administration, Congress and the FCC to ensure that the public safety network reflects the needs of rank-and-file officers.

During the first half of the 112th Congress, both chambers passed FAA Reauthorization legislation, sending their respective differences to a conference committee.  A conference report was stalled due to contentious language regarding union proceedings. Finally, on February 1, 2012, Conference Report 112-381 was filed. Shortly thereafter the House agreed on the report (248 – 169) and the Senate followed suit.

The Los Angeles Residential Helicopter Noise Relief Act of 2011, (H.R. 2677) was sponsored by Congressman Howard Berman (D-CA). H.R. 2677 would reduce helicopter noise in residential areas while at the same time providing an exemption for law enforcement activity. NAPO's concern with the legislation was the wording of the law enforcement exemption. We worked to change this from "may exempt" to "shall exempt".

Overall, NAPO agrees with the intent of Congressman Berman's underlying bill; it is important for helicopter operators to fly safely while minimizing noise impact on the surrounding communities. Equally important is the ability of first responders to preserve public safety.  NAPO also provided input on Senator Charles Schumer's (D-NY) amendment, The Controlling Helicopter Noise Pollution In Residential Areas Act, that was included in the FAA Reauthorization bill, also requesting that the language be changed from "may provide" to "shall provide". Ultimately Senator Schumer's language was not incorporated into the final draft of the legislation. This was a win for law enforcement that does not impact their ability to operate helicopters.

Throughout the entirety of the 112th Congress NAPO worked with members in both chambers and on both ends of the political spectrum to make it a punishable offense to aim a laser pointer at an aircraft or in its flight path. Legislation (H.R. 386) was first introduced by Congressman Dan Lungren (R-CA) in January 2011, and passed out of committees. Then, by a voice vote the House passed H.R. 386 and it was referred to the Senate. Companion legislation (S. 1608) was introduced by Senator Sheldon Whitehouse (D-RI) in September. NAPO worked with both of these offices as well as Senator Mark Kirk (R-IL) and Senator Barbara Boxer (D-CA). Additionally, NAPO worked in conjunction with these offices on S. AMDT. 8, submitted by Senator Whitehouse to the FAA Reauthorization bill that was agreed to 96-1. NAPO's statements of support were included in the Congressional Record.

The Federal Flight Deck Officers Association is a valued member of NAPO. Together, we have a vested interest in protecting pilots and passengers from the harmful effects of laser pointers. Reports of laser pointers being aimed at aircraft have dramatically increased over the past few years. Laser beams pointed at an aircraft can cause temporary blindness to pilots and jeopardizes aviation security. The inclusion of this important provision within the FAA Reauthorization Bill will not only help to protect those directly affected by the lasers but also strengthen the enforcement of homeland security. Our investment demonstrates NAPO's commitment to the safety of our nation, the community, and law enforcement officers.

EXECUTIVE DIRECTOR'S REPORT
NAPO SUBMITS TESTIMONY FOR THE SENATE JUDICIARY HEARING ON "PROTECTING THOSE WHO PROTECT US: THE BULLETPROOF VEST PARTNERSHIP GRANT PROGRAM"

This past year, 2011 was a deadly year for law enforcement, with a total of 177 officer fatalities. Of this number, 71 deaths were firearms-related. The number of firearm fatalities could have been higher. Countless lives were saved due to the use of bulletproof vests.  Protecting the lives and safety of its citizens is an important responsibility of the Federal Government. On February 15th, a Senate Judiciary Hearing examined this responsibility even further when it took into consideration "Protecting Those Who Protect Us: The Bulletproof Vest Partnership Grant Program." This is an issue of paramount concern to NAPO and its constituents.

Our testimony highlighted NAPO's involvement with the BVP program all the way from its inception through its current status. In fiscal year 2011, there was approximately $24.2 million allocated through the BVP grant program to 2,960 jurisdictions.  The Bulletproof Vest Partnership Grant Program authorization expires at the end of FY12. NAPO is working with offices in both the House and Senate to introduce legislation that would reauthorize the program.

Several concerns were addressed in the testimony. These included our continued commitment to protect rank-and-file from the potential harmful effects of any "mandatory wear policy" for vests. NAPO also took two positions on the fifty-seven-page page report issued in February by the Government Accountability Office (GAO). The first position, in an effort to remain fiscally mindful of taxpayers' resources, NAPO believes that BVP grants should be consolidated in one place and there should be no adverse affect on funding. The second position deals with unused funds within the BVP grant program. NAPO calls for a policy that assures these funds allocated to vests are utilized by departments and calls for agencies' management to be responsible for making sure this happens. Finally, NAPO strongly advocates for a comprehensive care, measurement, fit and maintenance policy for Bulletproof Vests.

Crime knows no jurisdictional boundaries. Thousands of jurisdictions across the United States must rely on the Bulletproof Vest Partnership Grant Program  to safeguard the lives of their officers.  NAPO was there for the creation and implementation of the BVP grant program and we will continue to be a strong, proactive force shaping this important program. Click this link to read NAPO's testimony.

For the second consecutive year President Obama has delayed the release of his annual budget. It appears good things do not come to those who wait.  Despite the growing demand for COPS Hiring and other law enforcement needs, the President's budget request did not meet NAPO's expectations. Overall, funding for NAPO's key initiatives was down compared to FY11 and FY12.

This year the President requested roughly $257.1 million for the COPS Hiring program, a steep decrease of funding request from the past two years.  Although this is still not an adequate amount, it is higher ($91,087 increase) than the FY12 final enactment of $166 million by Congress.

The budget request for the Byrne JAG program was at the $430 million level; also a decrease from the President's funding request in the past, but still higher than final enactment in FY12 Congressional Budget (only a $60,000 increase). The Byrne JAG program is authorized through FY12. NAPO is working on a strategy to extend authorization without impacting potential funding.

The Bulletproof Vest Partnership program received the same funding as in past years; $24 million and the VALOR initiative received a first time line item request by the President of $5 million.

The President's Budget request also calls for the consolidation of the National Preparedness Grant Program. This is important to NAPO's membership as it affects key grant programs that benefit law enforcement including; State Homeland Security Grant Program (SHSGP), Urban Areas Security Initiative (UASI), and Law Enforcement Terrorism Prevention Program (LETPP). NAPO is opposed to the consolidation of these programs. The Administration's plan to consolidate these grant programs and how, if at all, changes would occur remains unclear. NAPO is working to address this issue and has reached out to the Senate Committee on Homeland Security and Governmental Affairs.

Unique in the President's Budget was a call to invest in First Responders. In preparation for this formal request, NAPO attended a February 3rd event with President Obama (Photo below) during which he highlighted the importance of hiring Veterans and providing grant programs such as COPS Hiring. The President's request included $4 billion in immediate assistance for COPS Hiring while creating Veterans Jobs Initiatives. 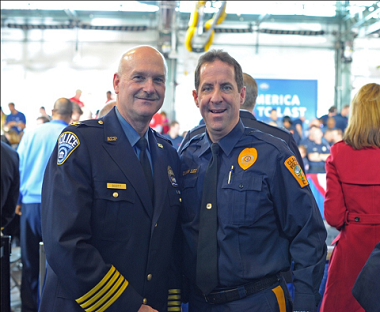 NAPO participated in a variety of events with the Administration to review the $3.8 trillion FY13 budget. We have actively been on Capitol Hill continuing the education of these programs and will continue to provide membership updates.

Please visit www.napo.org for detailed event information and exhibiting/sponsorship opportunities.
Contact us at (800) 322-6276 or via e-mail:  info@napo.org with any questions. 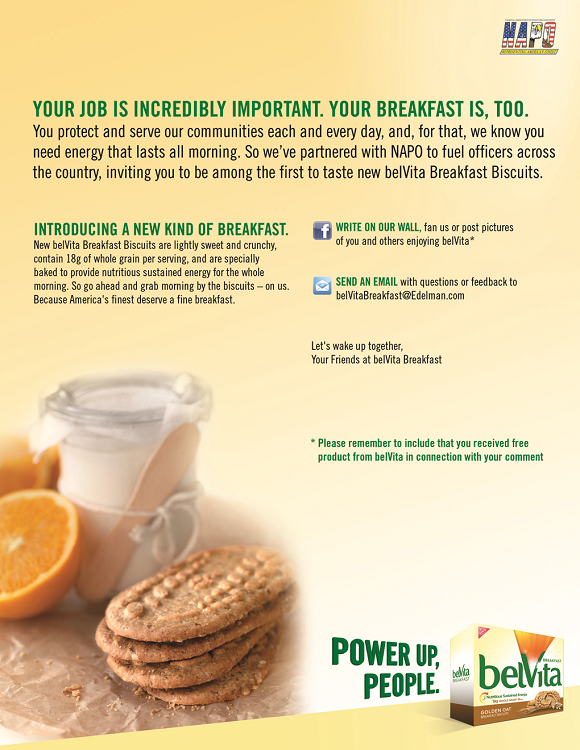