Over this past week, NAPO has joined fellow stakeholders in meetings with staffers for Senator Saxby Chambliss (R-GA) and Senator Bob Corker (R-TN) to request additional  support for the Bulletproof Vest Partnership (BVP) Grant Program Reauthorization Act of 2013 (S.933) and the National Blue Alert Act of 2013 (S.357).

On August 1, 2013, the Senate Judiciary Committee advanced the BVP Grant Program Reauthorization Act of 2013 to the Senate as a whole for consideration by a vote of 14 to 3.  NAPO continues to work with fellow law enforcement organizations to garner additional cosponsors to support this legislation.  The BVP Grant Program is a critical resource for state and local jurisdictions that saves lives.  NAPO plans to continue to engage members of Congress to ensure the passage of this vital piece of legislation, which extends the life of the BVP Grant Program through 2018.

On September 19, 2013, the Senate Judiciary Committee passed the National Blue Alert Act of 2013 by a vote of 15 to 3.  This bill would create a nationwide alert system to apprehend violent criminals who have injured or killed police officers.  This bill reaffirms NAPO’s commitment to ensuring the safety of our law enforcement men and women and the communities they serve to protect every day.

NAPO will continue to expend all available efforts to advocate for the passage of both the BVP Grant Program Reauthorization Act and the National Blue Alert Act, and we will keep our members updated on the status of these bills.

NAPO has continued its efforts to modify the recent amendment to the Driver’s Privacy Protection Act (DPPA) and garner additional support for the Officer Sean Collier Campus Police Recognition Act by meeting with staffers who work for the following members of House Judiciary Committee:  Congressman Jason Chaffetz (R-UT) and Congressman Tom Marino (R-PA).

The DPPA requires state motor vehicle departments to receive permission from individuals before their personal motor vehicle record may be sold or released.  The DPPA amendment authorizes a private right of action for knowing violations, and a court may award damages in the amount of $2,500 for each time a record was accessed, as well as attorney fees and other litigation costs.  Law enforcement officers are subject to these stringent punishments, even if they did not review files with criminal intent.

NAPO used the meetings to stress the negative impacts of the recent DPPA amendment on the law enforcement community and to propose modifications to the amendment.   During both of the meetings, NAPO stressed our commitment to helping with any efforts necessary to modify the amendment language.

Both of the staffers were receptive to our proposed language modifications to the DPPA amendment, which include adding a clause that explains that penalties will be applied only if persons access information with the specific intent to secure an economic benefit.  Also, NAPO proposes removing the $2,500 penalty for a violation of this act, as well as adding a statement that explains there must be repeated disregard of this law for action to be taken.  If the language is not modified, law enforcement officers will be subject to large fines, and even the loss of their licenses for de minimus actions.

NAPO also discussed the Officer Sean Collier Campus Police Recognition Act, (sponsored by Congressman Michael Capuano (D-MA)), with the staffers noted above.  This legislation would amend the Omnibus Crime Control and Safe Streets Act of 1968 by adding campus police officers to the Department of Justice's Public Safety Officers' Benefits Program. This bill would define a "campus police officer" as a police officer who is authorized to enforce the criminal laws and is employed by an institution of higher education.  The change would be retroactive to April 15, 2013 - the date of the Boston bombings.  NAPO has worked closely with Congressman Capuano and his staff on efforts to add cosponsors to this legislation, currently supported by the entire Massachusetts delegation, and plans to continue these efforts to ensure the passage of this important bill.

NAPO will continue to aggressively lobby members of Congress to gain support for our proposed language changes to the DPPA amendment, as well as garner additional cosponsors to support the Officer Sean Collier Campus Police Recognition Act.  We will keep our members updated on the status of these initiatives.

On October 18, 2013, President Obama nominated Mr. Jeh Johnson to be the next Secretary of the Department Homeland Security (DHS).  Shortly after Mr. Johnson’s nomination, NAPO sent a letter of support for Mr. Johnson’s nomination to the Chairman of the Senate Homeland Security and Governmental Affairs Committee (HSGAC), Senator Tom Carper (D-DE).

Mr. Johnson is one of the most highly qualified and respected national security leaders.  Mr. Johnson served nearly seven years in senior leadership roles at the Department of Defense (DoD) during two Administrations.

During Mr. Johnson’s HSGAC hearing on November 13, 2013, Chairman Carper said:  “I want to call on my colleagues — both Democrat and Republican — to join me in voting to confirm him as soon as possible.”  We are hopeful that the Senate HSGAC will act swiftly in confirming Mr. Johnson for this critical position.

NAPO has pledged its support for the Second Chance Reauthorization Act of 2013.  The bipartisan Second Chance Act, passed into law in 2008, reduced prison costs and improved public safety by giving federal, state, and local governments additional tools to help inmates more successfully reintegrate into their communities upon release and avoid reoffending. The bipartisan Second Chance Reauthorization Act of 2013 improves and consolidates the programs authorized by the Second Chance Act, and reauthorizes them at reduced levels to better reflect current appropriations. Additional details on the bill are below:

NAPO’s letter of support for this legislation is attached to the end of this report for your review.

NAPO’s new website launched on November 13th.  Please take a moment to check out our new user friendly site at:  www.napo.org.  We are excited about updated website, which will allow us to continue maintain strong communications and relationships with our members and sponsors.

If you have any questions or comments about the new website, please e-mail:  info@napo.org. 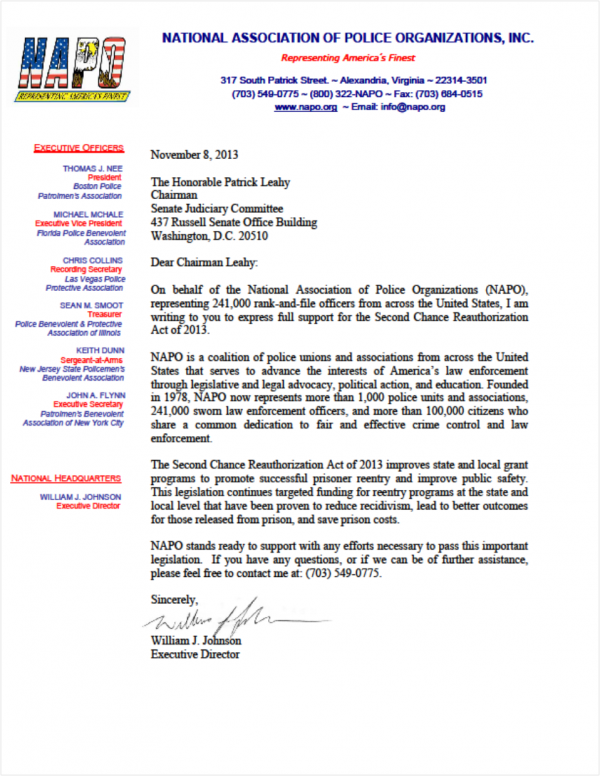