NAPO on the Hill: Police Reform

On June 24, Senators Tim Scott (R-SC) and Cory Booker (D-NJ) and Representative Karen Bass (D-CA), the top negotiators on police reform, released a statement on the status of negotiations saying they have come to an agreement on “a framework addressing the major issues for bipartisan police reform”.  The statement went on to say that there is still more work to be done and “nothing is agreed to until everything is agreed to”.  They have pushed the deadline back for finalizing a bipartisan proposal yet again, with the hopes of having legislative language agreed to before Congress adjourns for August recess.

While Senators Scott and Booker and Representative Bass have agreed to a framework – the issues that will and will not be included in a final reform proposal - no actual language has been agreed to yet.  NAPO continues to be involved in the process from the Republican side, providing our feedback and comments on draft proposals on issues ranging from qualified immunity and Section 242 to training and the use of chokeholds.  Senator Scott mentioned NAPO’s involvement during an interview on Fox and Friends in which he also stated that eliminating qualified immunity for officers is not included in the agreed upon framework.  Instead, the negotiators seemed to have agreed to some form of municipal liability.

NAPO has shared our concerns and recommendations on the issue of municipal liability with negotiators, which reflect the possible unintended consequences of such a change in law.  Any changes to municipal liability need to be tightly crafted to include caps on damages to be paid, limitations on how liability insurance companies dictate police practices and policies for the municipalities they cover and keep the cases it applies to very narrow.  From our discussions with officers and chiefs in Colorado, which eliminated qualified immunity for officers and increased municipal liability last year, there have been significant consequences that are harming departments and officers that the State legislature must fix.

We appreciate Senator Scott’s continued hard line against touching qualified immunity for individual officers and continue to press him, the other negotiators, and members of Congress to preserve this legal protection for officers.  This is one fight we know we cannot afford to lose.

NAPO is doing everything we can to safeguard the individual rights of officers.  In addition to qualified immunity, we are also working to protect long standing, constitutional good faith legal protections for officers, ensure officer due process is protected, officer privacy and confidentiality rights are guarded, and the rights of law enforcement to bargain over accountability and disciplinary actions is not eroded.

Our efforts have recently been covered by CNN and NBC News.  While these articles paint NAPO as an obstructionist, we are merely active participants in negotiations working to ensure the rights of our members are protected and that police reform does not do irreparable harm to our profession and public safety.

We will continue to be vigilant and remain actively involved with the staff, Senators and Representatives participating in negotiations. 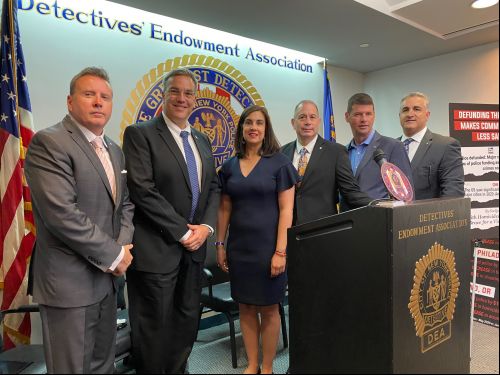 The Roundtable focused on the defunding of our nation’s police forces and the resulting rise in crime in our cities and communities and what the federal government can do to assist state and local law enforcement.  A significant part of the discussion revolved around the adverse consequences of New York eliminating cash bail for most crimes except for violent felonies.  This law took effect in July 2020 and has not only led to criminals being released without bail only to quickly re-offend and get re-arrested, but it has also impacted citizens’ willingness to cooperate with law enforcement for fear that the criminals they testify against will only be released.  This law alone has made law enforcement’s work more difficult and dangerous as officers have to put themselves at risk to recapture the offenders and Congress should think twice before considering bail reform at the national level.

The Roundtable also touched on the draft police reform proposal offered by Senator Cory Booker (D-NJ) and how devastating it would be to law enforcement across the nation.  Johnson emphasized to Ranking Member Katko and Representatives Malliotakis and Garbarino that members of Congress must play defense against that proposal and work to ensure any police reform proposal reflects both the interests of law enforcement and the communities they serve.

Johnson also touched on the need to fully fund the Community Oriented Policing Services (COPS) Hiring Program and refocus it back to its original intended purpose of assisting state and local law enforcement agencies hire and retain officers to promote community policing and fight crime in our communities.  The COPS Hiring Program funds should go directly to state and local agencies, who best know their needs and the needs of their communities, to increase the numbers of community police officers on our streets.

Johnson also discussed the Department of Justice Civil Rights Division using current law and statutes to prosecute the assault and murder of state and local officers engaged in the protection of federally recognized civil rights, such as those officers attacked while safeguarding protests.  NAPO believes that state and local law enforcement, as part of the performance of their duties, are protectors of citizens’ civil rights and thus any attacks on officers who are engaged in such duties should be viewed by the Civil Rights Division as a violation of protected federal civil rights.

NAPO appreciates being able to participate in the Roundtable, with so many of our New York City member organizations represented, and thanks Ranking Member Katko and Representatives Garbarino and Malliotakis for their strong support of the law enforcement community.  We look forward to working with them to ensure state and local law enforcement have the assistance and resources they need to protect and serve our communities.

On June 23, President Biden announced his Administration’s “Comprehensive Strategy to Prevent and Respond to Gun Crime and Ensure Public Safety”, which is in response to the latest numbers on violent crime rates, particularly gun-related crimes, across the country, which are the highest in over a decade.  A significant part of the strategy is providing state and local law enforcement resources to help them tackle violent crime in the communities they serve.

In the Strategy, the Administration expanded the allowable uses for how states and localities can use the State and Local Fiscal Recovery Funds passed as part of the American Rescue Plan Act to reduce and respond to increased violence due to the pandemic.  The updated Treasury Department guidance on the use of State and Local Fiscal Recovery Funds provides several ways for recipients to respond to the uptick in gun violence, ranging from community violence intervention programs to mental health services to hiring of public safety personnel.

Specifically, state and local governments can use the funding to rehire police officers and other publi servants to restore law enforcement and courts to their pre-pandemic levels. In communities that are experiencing an increase in violent crime, they can use the funds to respond to or mitigate the effects of violence, including:

The State and Local Fiscal Recovery Funds are available now for state and local governments. The aid will remain available until December 31, 2024.

Law enforcement officers often retire earlier than other occupations because of the physical demands and unique hazards of the job, and many are faced with mandatory retirement upon reaching a certain age.  Across the country, retiring officers are losing their employer-provided health insurance and, as they are years away from being Medicare-eligible, are forced to spend their retirement money on health insurance premiums.

This legislation is important as it would give law enforcement retirees another option to purchase affordable health insurance coverage. It would ensure they continue to have access to reasonable, comprehensive health insurance in retirement until they reach age 65 regardless of whether their state pension plan provides insurance coverage.  The legislation would only allow the retired officers to buy-in to Medicare early; family members and dependents would not be eligible for this coverage.

NAPO believes that the Expanding Health Care Options for Early Retirees Act would help preserve the retirement security and the health of those public servants who selflessly serve and protect our communities. Preserving the retirement security of all our members is a top priority for us.  There is some concern that those employers whose pension plans provide health care coverage to retirees could try to force retirees into Medicare early rather than provide health coverage. NAPO is monitoring this concern and will work to address it if the prospect of this legislation being enacted negatively impacts our members’ ability to negotiate health care for their retirees.

On June 22, the Senate Judiciary Committee held a hearing on “Examining Federal Sentencing for Crack and Powder Cocaine”.  Rather than being a bipartisan hearing that explored the issues of crack versus powder cocaine and the impact of and reasonings for the sentencing disparity between the two, it was a partisan show in support of the Eliminating a Quantifiably Unjust Application of the Law (EQUAL) Act, sponsored by Chairman Richard Durbin (D-IL) and Senator Cory Booker (D-NJ).  The EQUAL Act would eliminate the sentencing ratio for crack and powder cocaine offenses and repeal mandatory minimums associated with crack cocaine offenses.

NAPO submitted a letter for the hearing record to Chairman Durbin and Ranking Member Charles Grassley (R-IA) advising the Committee of our opposition to the EQUAL Act.  This legislation ignores the concerns raised by NAPO and the law enforcement community that crack cocaine has proven to be more accessible on the streets and thus presents a greater danger to our nation’s communities and law enforcement.

As crack is usually sold in much smaller quantities than powder cocaine, NAPO believes that tinkering with the current sentencing structure will negatively affect the work law enforcement has done to protect our nation’s communities from the crime and violence associated with crack cocaine.  It is turning a blind eye to the fact that crack cocaine has had, and continues to inflict, an absolutely devastating effect upon our communities.

The reduction of crack cocaine penalties will only accelerate the destruction brought to our neighborhoods by those convicted of federal crack offenses. This reduced sentencing will lead to a cyclical pattern of abuse, apprehension, and release.  It will do nothing to abate the plague of crack cocaine upon individuals, families, and communities.

As the Committee continues to examine federal sentencing for criminal offenses involving crack cocaine, we are urging Committee members to consider our serious concerns with the EQUAL Act to ensure just sentencing and the protection of our communities.