NAPO’s Executive Director, Bill Johnson, joined leadership from other national police groups in a phone conversation with Attorney General Eric Holder on September 4, 2014.  The Attorney General provided an update on the Department of Justice’s “Pattern and Practice” investigation of Ferguson.

NAPO remains heavily engaged on this issue, and will keep our members updated as investigations move forward.  If you have any questions about NAPO’s interaction with Attorney General Holder, please contact Bill Johnson at:  bjohnson@napo.org.

The Court has now ordered a response from the plaintiffs. Although it certainly does not guarantee that certiorari will be granted, it does suggest that at least one Justice believes it to be a cert worthy issue.  The brief is available on the SCOTUS blog page:  http://www.scotusblog.com/case-files/cases/schultz-v-wescom/.

NAPO will keep our members updated on the status of this initiative.  If you have any questions, please contact Bill Johnson at:  bjohnson@napo.org.

On August 12, 2014, NAPO’s Executive Director, Bill Johnson, sent a letter to NFL Commissioner Goodell requesting the Commissioner reconsider the League’s policy of not allowing qualified off-duty officers to carry their concealed firearms at games and events, even though the NFL allows private security guards to be armed at those same venues.  Copies were also sent to the commissioners of the NBA, NHL, MLB, and the CEO of the National 9/11 Museum in New York, which also has such a policy.

NAPO will continue to urge the NFL to reconsider its current policy.  If you have any questions about NAPO’s position, please contact Bill Johnson at:  bjohnson@napo.org.

Senator Claire McCaskill (D-MO) has scheduled a Senate hearing on September 9, 2014 to examine the “militarization” of local police departments.  Senator McCaskill will use the hearing to examine federal programs that enable local police departments to acquire military equipment, such as the Defense Department’s 1033 program for surplus property and grants made through the Department of Homeland Security.

In anticipation of the hearing, NAPO has met with staffers for key members of the Senate Homeland Security and Governmental Affairs Committee (HSGAC), including staffers for Senator McCaskill and Senator Mary Landrieu (D-LA), to discuss our views of the 1033 Program.  NAPO stressed that the vast majority of equipment provided under the 1033 Program is defensive in nature.  Furthermore, the program enables law enforcement departments to garner equipment that they would otherwise be unable to afford.  NAPO highlighted that ending the program would leave law enforcement departments unable to equip their officers with the necessary tools to keep their communities safe.

NAPO has been closely tracking pending legislation related to the 1033 Program, and plans to attend this week’s hearing.  We will continue to provide our members with updates on all legislative initiatives regarding the 1033 Program.  If you have any questions about the hearing, please contact Melissa Nee at:  mnee@napo.org.

On August 27, 2014, Congressman Adam Schiff (D-CA) announced that he is circulating a letter to his colleagues, which will be sent to Attorney General Eric Holder, urging the Department of Justice to help fund local police departments’ purchase of small body-worn cameras in order to increase transparency, decrease tensions between police and community members, and create a record of events.

NAPO met with Congressman Schiff’s staff on September 4, 2014 to stress the importance of including state and local agencies, as well as law enforcement leadership, in discussions regarding body camera requirements.  We also noted that body camera requirement decisions should be made on an agency-by-agency basis.

NAPO looks forward to working with the Congressman as discussions relating to body camera policies move forward.  If you have any questions about this meeting, please contact Melissa Nee at:  mnee@napo.org.

NAPO continues to pursue the passage of the Second Chance Reauthorization Act.  On September 5, 2014, NAPO contacted senior staffers for twenty members of Congress to request they consider cosponsoring the legislation.  NAPO highlighted our support of the Second Chance Reauthorization Act of 2013, which improves state and local grant programs to promote successful prisoner reentry and improve public safety. This legislation continues targeted funding for reentry programs at the state and local level that have been proven to reduce recidivism, lead to better outcomes for those released from prison, and save prison costs.

NAPO plans to continue to work with key stakeholders to urge the House and Senate Judiciary Committees to mark-up the legislation this fall.  We will keep our members updated on the status of this initiative.

If you have any questions about this legislation, please contact Melissa Nee at:  mnee@napo.org.

Please join NAPO October 24 - 25, at the Red Rock Casino, Resort & Spa in Las Vegas to participate in a NAPO leadership Roundtable Discussion.  Topics include the Affordable Care Act; Current Labor Issues Nationally; Our Opponents’ Legislative and P.R. Strategy; National Image and Awareness of NAPO; and Recruiting and Growth for our Association.  Be a part of setting the direction for our organization’s future.

Please complete the registration form attached to this report and return the document to NAPO attention: Elizabeth Loranger by October 6.  Fax to (703) 684-0515 or email to eloranger@napo.org. 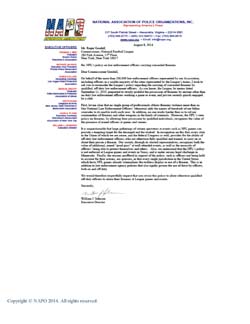 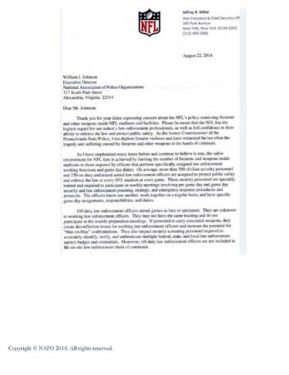 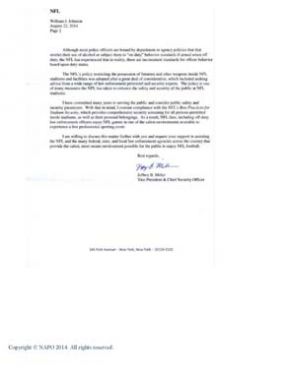 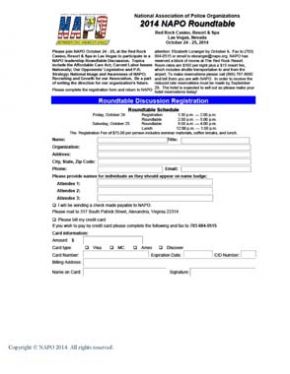