NAPO Participates in Meeting with President,
Activists
on Community Policing

On July 13th, President Michael McHale represented NAPO at a meeting at the White House with President Obama, law enforcement management organizations, civil rights activists and Black Lives Matter activists to have a conversation about community policing and the criminal justice system in the wake of the shootings in Louisiana, Minnesota and Texas. NAPO was one of only two organizations representing rank-and-file officers at the meeting and President McHale was the only active duty police officer. 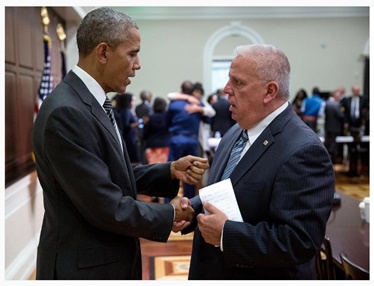 
During the over four hour long meeting, President Obama listened as each participant briefly expressed their biggest issues and  concerns regarding police and community

relations. Many of the priorities that were repeated throughout the meeting are included in the recommendations of the President’s Task Force on 21st Century Policing, including shaping best practices, additional training – including de-escalation training – for police departments, and data collecting and reporting. One of the likely results of this meeting will be the Task Force ramping up its work to get its recommendations implemented nationwide.

Given the make-up of the room, McHale reiterated that rank-and-file officers must be included in these conversations at both the local and national levels. Particularly, they must be represented as this process moves forward and as the Task Force continues its work. It is the rank-and-file officers on the streets who will be most impacted by these policies and they should have a voice in how their profession responds to calls for criminal justice and police reform. Rank-and-file officers cannot be the scapegoats for management and activists to beat upon without a way to defend and protect themselves.

At the end of the meeting, President Obama pulled McHale aside and stated that he appreciated his comments and agreed with him that rank-and-file officers have to be involved in discussions around policing. The President went on to assure McHale that going forward, NAPO and rank-and-file officers would be represented and participating in the work of the Task Force.

The White House is working on another face-to-face meeting with the Vice President for early August to continue the conversation with NAPO. We will keep our members up to date on any actions that come out of these meetings and we will continue to ensure your rights and interests are represented and protected.

NAPO Executive Director Bill Johnson met with White House officials on July 14th to discuss our concerns with the President’s Executive Order restricting law enforcement’s access to lifesaving surplus military equipment. Johnson met with the Deputy Assistant to the President for Urban Affairs, Justice and Opportunity, the Assistant Attorney General for the Office of Justice Programs and leaders of the Law Enforcement Equipment Working Group from the Departments of Justice, Homeland Security and Defense.  NAPO continues to be the only or one of only two organizations representing the voice of rank-and-file police officers in these meetings with the President, Vice President and senior Administration officials.

NAPO has been a loud critic of the President’s Executive Order as access to surplus military equipment is a top issue for agencies across the country. NAPO’s top concern with this issue is the need for unfettered access to vital defensive gear, such as ballistic helmets, shields and body armor, which are restricted under the Executive Order, and agencies must jump through unnecessary and burdensome hoops to obtain.

The meeting was a frank and candid conversation which started with the Administration officials stating that it was never their intent to do away with any equipment needed by law enforcement. Johnson pointed out that the Executive Order itself states that prohibition of certain equipment is “appropriate because the substantial risk of misusing or overusing these items… could significantly undermine community trust and may encourage tactics and behaviors that are inconsistent with the premise of civilian law enforcement. These concerns outweigh the Federal Government’s interest in providing this equipment to address law enforcement needs (that could not otherwise be fulfilled).”

At the beginning of the meeting it seemed as though the Administration had already decided against making any changes to the Executive Order; however, by the end there was a commitment to ease some of the requirements. Specifically, they will make minor modifications to the annual training requirement and to the required reporting after a “significant incident”. The Administration was expected to make this announcement at the July 21, 2016 meeting of the Federal Interagency Law Enforcement Equipment Working Group, which NAPO attended.

The Administration officials also committed to looking at redefining the restricted items and stated that NAPO will be involved in that process. NAPO will continue to work with the Administration to advance the rights and interests of our members on this issue and all issues affected law enforcement officers today.

On July 21st, NAPO participated in the Federal Interagency Law Enforcement Equipment Working Group stakeholder meeting. The Working Group was established by President Obama’s Executive Order to make recommendations on restricting surplus military equipment and oversee the implementation of those recommendations. Although law enforcement was represented at the meeting, we were heavily outnumbered by civil rights activists and government officials.  NAPO was one of only two organizations present that represent rank-and-file officers.

The Working Group did announce the two changes to the Executive Order that were laid out to NAPO by the Administration in our July 14th meeting: 1) the annual training requirement does not have to be conducted in a classroom setting, it can be satisfied through in-person presentations, announcements during roll call and video training; and 2) only federally-acquired equipment obtained in fiscal year 2016 and beyond have to be reported for the “significant incident” data collection and reporting – agencies no longer have to report on similar equipment purchased with non-federal funds. While these changes are not yet finalized, they are expected to be implemented at the start of the 2017 fiscal year on October 1st.

Many of the civil rights organizations are still calling for the elimination of the 1033 Program and will certainly be pushing for an expansion of the equipment lists to counter our calls to narrow or eliminate the lists.  NAPO will be providing written recommendations and we are continuing the fight to ensure that our officers have access to the protective equipment they need to keep themselves and their communities safe. We will keep our members up to date on the status of the Executive Order and any changes that are made for fiscal 2017.

NAPO on the Hill: Meetings with House Armed Services
Committee on 1033 Program

On July 13th, NAPO met with staff from the offices of House Armed Services Committee Chairman Mac Thornberry (R-TX) and Ranking Member Adam Smith (D-WA) to discuss our asks pertaining to the Department of Defense 1033 Program in the Fiscal 2017 National Defense Authorization Act (NDAA).  The House and Senate have each passed their own versions of the Act and have started negotiating a compromise bill.  Negotiations are expected to last throughout the summer recess.

NAPO, together with other national law enforcement organizations, is urging negotiators to lay the ground work for rescinding the Executive Order. During consideration of the bill in the Senate, Senator James Inhofe offered an amendment, which NAPO endorsed, that would have rescinded Executive Order 13688 and return control of the 1033 Program to the Secretary of Defense and Congress. Despite Senator Inhofe’s extraordinary efforts, which we greatly appreciate, this amendment was rejected by a tie vote. Because this amendment failed, we are unable to revoke the Executive Order in the NDAA, but we can make certain there is support for law enforcement’s access to surplus military equipment.

Chairman Thornberry’s staff indicated that protecting law enforcement’s access to this equipment is a priority for him in negotiations. They also stated he supports the NAPO-endorsed provision offered by Congressman Ted Poe (R-TX) – in the House version of the National Defense Authorization Act (NDAA) – that would restore state and local law enforcement’s access to such equipment for border protection. It was a very productive meeting and NAPO will work to build support with other negotiators for Chairman Thornberry’s efforts.

Ranking Member Smith’s staff was understanding of our concerns with the Executive Order and stated that the Congressman supports the law enforcement community and wants to work with us to ensure our needs are met. However, staff was non-committal when it came to whether or not the Congressman would support our efforts to restore law enforcement’s access to surplus military equipment.

On Thursday July 7, Department of Justice (DOJ) announced it will withhold Byrne Justice Assistance Grants (Byrne-JAG) and State Criminal Alien Assistance Program (SCAAP) grants from jurisdictions that forbid or in any way restrict their officials from sharing information with federal immigration officials.

Specifically, the guidance states that jurisdictions must comply with all applicable laws to receive the grants, including 8 U.S.C. § 1373 which provides that “a Federal, State, or local government entity or official may not prohibit, or in any way restrict, any government entity or official from sending to, or receiving from, the Immigration and Naturalization Service information regarding the citizenship or immigration status, lawful or unlawful, of any individual.”

NAPO appreciates the DOJ’s efforts to ensure states and localities are complying with federal immigration law, but we have strong concerns that targeting Bryne-JAG funding as a penalty will not have the intended results.  Instead, communities and the law enforcement who serve them will lose out on significant funding for training, equipment, multi-jurisdictional drug and gang task forces, information sharing and technology and drug treatment programs.  The DOJ should instead focus its penalties on the Economic Development Assistance Programs and the Community Development Block Grant, funding which state and local elected officials are more concerned about being able to obtain.

NAPO will let the DOJ know of our concerns and we will continue to push for the Stop Dangerous Sanctuary Cities Act, which not only eliminates sanctuary jurisdictions, but also protects state and local law enforcement officers from being liable for complying with a federal immigration detainer.  If your jurisdiction has been denied Bryne-JAG funds due to its status as a sanctuary city, please contact Andy Edmiston at aedmiston@napo.org and let her know of the ramifications of this policy.

The “Sponsor/Cosponsor” spreadsheet is a useful tool to check if your members of Congress have supported pieces of legislation that will impact our members. NAPO will update this spreadsheet regularly, and continue to ensure our voice is heard on Capitol Hill.

If you have any questions about any of the legislation that NAPO is currently working, please contact Andrea Edmiston at: aedmiston@napo.org.

Special thanks to the Palm Beach County PBA and the Law Enforcement Sponsors
for helping to make this year’s convention a success!

Detectives’ Endowment Association of the NYPD

Patrolmen’s Benevolent Association of the NYPD

We would also like to thank our corporate sponsors and exhibitors for their generous support.  Without their financial support many of the convention events simply would not be possible.

We look forward to seeing everyone again in 2017 at
NAPO’s 29th Annual Convention in New York City! 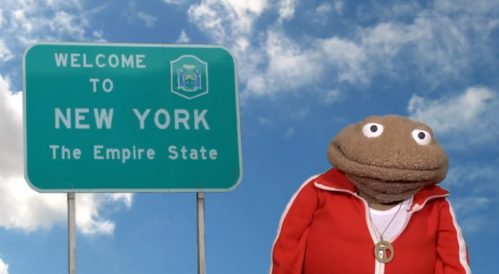 Click on this image to see a video of Tourist Tips!