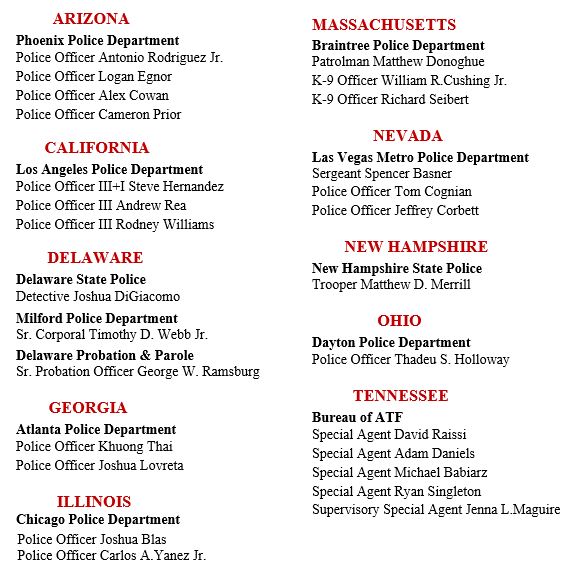 Congress passed the massive Fiscal Year 2022 consolidated appropriations package on March 10 with just a day to spare before the federal government was scheduled to run out of funding.

NAPO’s priority grant programs were sufficiently funded and the various requirements the House tried to place on those programs to force its police reform policies on state and local law enforcement were largely rejected in the final bill.  NAPO pushed hard to ensure those police reform provisions, including language that would have forced states and localities to strip certain discipline procedures and officer due process rights from collective bargaining agreements, were not included in the final bill. While we count their rejection as a victory, several reform provisions were included in the legislation and we will need to work with the Department of Justice to ensure there are no negative implications.

The most concerning to NAPO is a provision that directs the Attorney General to establish a Task Force on Law Enforcement Oversight comprised of individuals from the Justice Department’s Civil Rights Division, Office of Justice Programs, Office of Community Oriented Policing Services (COPS), FBI, Community Relations Service, and the Office of Tribal Justice. The Task Force will consult with law enforcement associations, labor organizations, and community-based organizations to "coordinate the process of the detection and referral of complaints regarding incidents of alleged law enforcement misconduct.”  This language was also passed as part of the FY 2021 omnibus appropriations measure, but as appropriators point out, the Department has not acted on it yet.  We will work with the Department of Justice as it moves forward with implementing this provision to ensure it does not infringe on officer due process or malign good officers for doing their jobs.

The FY22 spending measure also reminds the Attorney General that $5 million was appropriated in FY 2021 to support the maintenance and expansion of the National Decertification Index (NDI), which was begun as part of President Trump’s 2020 Executive Order on Safe Policing for Safe Communities.  NAPO Executive Director Bill Johnson is a member of the advisory committee overseeing this work, which is being led by the International Association of Directors of Law Enforcement Standards and Training (IADLEST), in partnership with the Department of Justice, Bureau of Justice Assistance (BJA).  Johnson continues to work to ensure any allegations must have been officially and fairly adjudicated and that officers have due process before they are placed in the NDI database.  NAPO has pushed the Administration to maintain this work and not reinvent the wheel when it comes to a national officer misconduct database.

Another provision we will need to monitor directs the Office of Community Oriented Policing Services (COPS) to place preference on COPS Hiring Program (CHP) grant applicants that commit to recruiting officers from the communities that they serve.  While we do not oppose prioritizing hiring officers who reflect their communities, we need to ensure that agencies that are in desperate need of these grant funds are not penalized if their application does not include or prioritize such a commitment. Law enforcement agencies across the country are facing significant staffing issues that will not be fixed by focusing on recruitment solely from the communities being served.

NAPO worked hard to ensure police reform provisions did not impact our priority DOJ grant programs.  Within the COPS Office, Congress funded the COPS Program at $512 million, of which, $246 million went to the CHP, $11 million for active shooter training, $50 million for anti-meth and heroin task forces, and $53 million for grants under the STOP School Violence Act. Appropriators also provided $8 million for the Law Enforcement Mental Health and Wellness Grant Program and the Supporting and Treating Officers in Crisis (STOIC) Program, which provide funding and resources for training, peer mentoring and mental health program activities.

Further, $40 million of the $512 million in COPS Office funding is allocated for community policing development activities, which include co-responder crisis teams, de-escalation and duty to intervene training, accreditation support, and diversity and anti-bias training.

The Mentally Ill Offender Treatment and Crime Reduction Act (MIOTCRA) is funded at $40 million, illustrating the strong support amongst members of Congress to ensure adequate funding for crisis intervention teams (CIT) and other mental health training for law enforcement.  Further, $10 million under the Byrne Justice Assistance Grant (Byrne JAG) program is appropriated to provide officer training on responding to individuals with mental illness or disabilities.

The Byrne JAG program received a significant increase in funding over FY 21 levels and is funded at $674.5 million, with carves outs for the mental health training, the VALOR Program ($13 million) and Project Safe Neighborhoods ($20 million), among others.

Other DOJ NAPO priorities were funded at similar levels to last fiscal year: $30 million for the Bulletproof Vest Partnership (BVP) Grant Program; $20 million for the Adam Walsh Act; and $82 million for the STOP School Violence Act through the BJA. The spending measure also included $415 million for grants programs to respond to the opioid crisis and substance abuse in our communities.

Congress also provided $120 million through BJA for programs to improve community – police relations, of which $35 million is appropriated for the Body-Worn Camera Initiative to help agencies purchase and maintain body-worn cameras, $35 million for community recidivism reduction programs, and $50 million for the community violence intervention and prevention initiative.

NAPO scored many victories in this FY 22 omnibus legislation and we will monitor the implementation of the various police reform proposals as they are enacted. There are just over 6 months remaining in FY22.  President Biden is expected to release his FY23 Budget Proposal in the coming weeks, kicking off Congressional appropriations for the next Fiscal Year that begins on October 1, 2022.

The FY 2022 consolidated appropriations bill extended the Drug Enforcement Agency’s (DEA) temporary classwide scheduling of all fentanyl-related substances as Schedule 1 drugs under the Controlled Substances Act – making them illegal – through December 31, 2022. While NAPO pushed for the scheduling to be made permanent, we count this extension as a win as an end or even a lapse in this scheduling would threatened law enforcement’s efforts to fight fentanyl and similar opioids that are scourging communities across the country.  The classification of fentanyl as a Schedule 1 substance is necessary for all law enforcement actions on fentanyl, allowing law enforcement to prosecute criminals who make and distribute the drug.

According to the Centers for Disease Control and Prevention (CDC), an estimated 100,000 Americans died of an overdose death over a recent 12-month period. The primary driver of these deaths were synthetic opioids, like illicitly manufactured fentanyl and fentanyl-related substances. The spread of fentanyl drugs in our communities is devastating. It is being mixed with already deadly illicit drugs, hidden in counterfeit drugs, and being peddled at alarmingly high rates. From October 2020 through September 2021, U.S. Customs and Border Patrol seized 11,201 pounds of fentanyl. One kilogram of fentanyl is equivalent to 500,000 lethal doses, making this record amount equal to 2.5 billion fatal doses. The fentanyl produced is up to 100 times stronger than morphine and 50 times stronger than heroin. The CDC found most fentanyl overdoses were from illicitly manufactured fentanyl or that made illegally and smuggled into the country by criminal organizations. As we see the scourge of fentanyl drugs impacting our communities, it therefore comes as no surprise that fentanyl overdoses are the number one cause of death among 18–45-year-olds.

We will use the extension of fentanyl’s status as a Schedule 1 drug to continue to work with our partners in Congress and the law enforcement community on a permanent solution to dealing with fentanyl in order that we do not have to continue to fight to keep these dangerous drugs scheduled.

The Closing the Law Enforcement Consent Loophole Act makes it a criminal offense for a federal law enforcement officer to engage in a sexual act with anyone in his or her custody or while exercising their authority under color of law, regardless of consent. It also incentivizes states to have similar laws on the books by providing grant funding through the STOP Violence Against Women Formula Grant Program and the Sexual Assault Services Program to only those states that have enacted such laws. Additionally, the legislation requires states receiving grants under this Act to submit information on the number of complaints made to law enforcement agencies regarding an officer engaging in a sexual act while acting under the color of law to the U.S. Attorney General on an annual basis.

The Violence Against Women Act (VAWA) Reauthorization Act reauthorizes the VAWA federal grant programs through 2027 and includes key provisions to enhance tools to prevent domestic violence, dating violence, sexual assault, and stalking while improving access to essential support services such as healthcare and safe housing for all victims. It also provides increased resources and training for law enforcement and our judicial system and strengthens rape prevention and education efforts, supports rape crisis centers, improves the training of sexual assault forensic examiners, and broadens access to legal services for all survivors, among other things.

NAPO filed a new amicus curiae brief on March 7, 2022, in the case of Vega v. Tekoh in the United States Supreme Court.  The issue in this case is whether individual officers can be held personally liable in a federal civil rights action for Miranda warning violations. In current practice, the remedy for a violation of Miranda warnings is that the statement obtained in violation of Miranda cannot generally be used against the defendant in a criminal trial.  In this case, the U.S. Court of Appeals for the Ninth Circuit (one step below the Supreme Court) held that individual officers can be held personally liable for a federal civil rights violation where they violated the Miranda warning requirements.

NAPO argues in the brief that this holding by the Ninth Circuit is clearly erroneous and would only lead to further damage to law enforcement efforts at a time when violent crime is spiking, and morale is low.  Also, technically, Miranda is only violated when the statement is actually introduced at trial, and this action is in the hands of prosecutors, lawyers, and judges, not the officer who may or may not have properly Mirandized the suspect months or even years earlier.

We will keep our members updated on the status of this case. If you have any questions about the amicus brief NAPO filed or on the case itself, please contact Bill Johnson at (703) 549-0775 or info@napo.org.

NAPO once again endorsed the SHIELD Act (H.R. 6998 / S. 3777), sponsored by Representative Jackie Speier (D-CA) and Senator Amy Klobuchar (D-MN).  In a world where smart phones and devises are used to record and transmit every moment in life, it is becoming increasingly important to protect against malicious sharing of private, explicit images. These online privacy violations exponentially and disproportionately target women and minors.

The SHIELD Act would narrowly establish federal criminal liability for individuals who share private, explicit images without consent. While more than 40 states have enacted statutes in this area, federal intervention is necessary to provide complete and consistent coverage across state lines. We look forward to working with Rep. Speier and Senator Klobuchar to pass this important legislation.