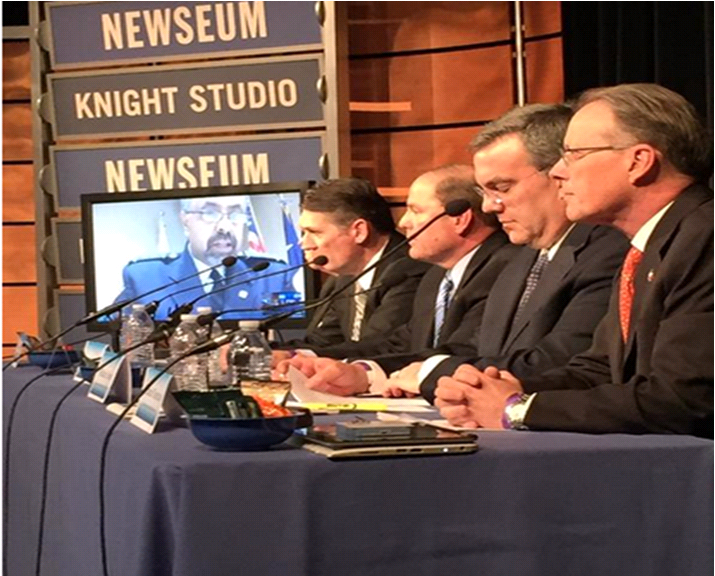 On December 18, 2014, President Obama signed an Executive Order to create the Task Force on 21st Century Policing, and announced its members, which include NAPO.  NAPO is the only police rank and file group in the nation to have a seat on the Commission itself.   Our Treasurer, Sean Smoot, of the Illinois PB&PA, was appointed by the President to the Commission.

Due to time limitations, Johnson focused his remarks on the following topics:  workplace due process; labor/management partnerships; safety equipment; and officer stress.  Johnson made the following recommendations to the panel:

NAPO was grateful for the opportunity to testify at the listening session, and we will continue to make our voice heard as the Commission finalizes recommendations.

If you have any questions about the Task Force on 21st Century Policing, please contact Bill Johnson at:  bjohnson@napo.org.

The group discussed the following pieces of legislatoin with the delegation:

The delegation was very receptive to NAPO’s proposals.  We look forward to continuing to work with these members of Congress to advance our top priorities.

If you have any questions about these meetings, please contact Bill Johnson at:  bjohnson@napo.org.

Johnson used the meeting to discuss consent decrees and the Civil Rights Division’s investigation of law enforcement officers.  They also discussed ways to improve the relationship between DOJ’s Civil Rights Division and law enforcement where possible.  Johnson emphasized the importance of including true rank and file representatives in the process.

Acting Assistant Attorney General Gupta assured Johnson that she would work to ensure better communications between her office and law enforcement.  She also said that she would provide NAPO with advance notice before announcements are made that would impact law enforcement.  She furthered that NAPO would have the ability to sit down with her to present our perspective prior to final decisions being made on cases and matters her office is handling.  She also asked NAPO to contact her directly with concerns or criticisms of any programs or activities they are conducting.

NAPO will continue to stay engaged and keep our members updated on the Civil Right Division’s work.  If you have any questions about this meeting, please contact Bill Johnson at:  bjohnson@napo.org.

On February 26, 2015, the Justice for Victims of Trafficking Act passed out of the Senate Judiciary Committee without opposition.  This legislation would boost support for and protection of victims of human trafficking by increasing law enforcement resources, enhancing victims’ services, and increasing penalties in an effort to combat child sex trafficking, child pornography, sexual exploitation, and human trafficking.

NAPO has worked closely with the bill’s sponsor, Senator John Cornyn (R-TX), and fellow stakeholders to garner support for this legislation.  We are committed to continuing to work with Senator Cornyn and his staff to ensure this legislation is passed during the 114th Congress.

On February 26, 2015, the Senate Judiciary Committee voted 12-8 to approve Loretta Lynch as the next U.S. attorney general. Three Republicans voted in her favor - Orrin Hatch of Utah, Jeff Flake of Arizona, and Lindsey Graham of South Carolina - along with all Democrats on the committee.

President Barack Obama officially nominated Loretta Lynch, a United States attorney from New York, as the next Attorney General of the United States at a White House ceremony on November 8, 2014. Lynch is an experienced prosecutor, with deep relationships inside the Justice Department, and a long history of litigating political corruption, terrorism, and organized crime cases.

NAPO continues to evaluate Attorney Lynch’s nomination, and we are closely following the confirmation process. We will continue to keep our members updated.

If you have any questions about this nomination, please contact Bill Johnson at: bjohnson@napo.org.

On February 27, 2015, NAPO met with a senior staffer for Congressman Frank Guinta (R-NH) to discuss the Ax the Tax on Middle Class Americans’ Health Plans Act, sponsored by the Congressman.

Beginning in 2018, the Patient Protection and Affordable Care Act imposes a new 40% annual excise tax on taxpayers who are covered by high-cost, or “Cadillac” health insurance plans.  NAPO continues to fight against the impending “Cadillac” health insurance plan tax, as the new tax will negatively impact public safety officers across the nation.  This bill will repeal the “Cadillac Tax,” and ensure public safety officer and their families are not unduly burdened.

NAPO pledged our support for this important bill immediately after it was introduced.  We look forward to working with Congressman Guinta and his staff to pass this important legislation.

If you have any questions about our efforts to repeal the “Cadillac Tax,” or any of the legislation noted above, please contact Melissa Nee at:  mnee@napo.org.

Last week, NAPO sent an individual letter and a joint law enforcement stakeholder letter to Congressional leadership, advising them of our strong support for the James Zadroga 9/11 Health and Compensation Reauthorization Act.  The letters were sent to House Speaker John Boehner (R-OH), Senate Majority Leader Mitch McConnell (R-KY), House Minority Leader Nancy Pelosi (D-CA), and Senate Minority Leader Harry Reid (D-NV).  The letters stressed our strong support for the Zadroga bill, and requested assistance in moving the legislation through the Congress as expeditiously as possible.  (NAPO’s letter is attached to this report for your convenience and review).

As noted above, the Zadroga bill’s two critical programs providing medical treatment and compensation for 9/11 heroes – the World Trade Center Health Program and the September 11th Victim Compensation Fund – are set to expire in October 2015 and October 2016 respectively. This legislation would continue these programs for 25 more years, through 2041.

9/11 responders and survivors are still battling serious health crises resulting from exposure to the toxins at Ground Zero. More than 30,000 9/11 responders and survivors have an illness or injury caused by the attacks or their aftermath, and over two-thirds of those have more than one illness. Many are disabled and can no longer work. They are suffering from a host of chronic diseases: asthma, obstructive pulmonary disease and gastroesophageal reflux disease, and many more.

Medical research has identified more than 60 types of cancer caused by 9/11 toxins. More than 2,900 people have been diagnosed with cancers caused or made worse by the aftermath of the attacks - more than 800 New York Fire Department members and more than 550 New York Police Department personnel are struggling with serious 9/11-related illnesses, not including the more than 70 firefighters and 60 NYPD officers who have died from their 9/11-related illnesses.

Responders came from all over the country to aid in the response to the attacks. And some area residents, workers, and survivors have since moved and are currently receiving care in cities and states across the country. Participants enrolled in the World Trade Center Health Program for treatment currently reside in all 50 states and in 429 of the 435 Congressional districts in the country.

These heroes put their lives on the line to serve us, and must be afforded every resource available as they cope with chronic health conditions caused by exposure to toxic chemicals at the World Trade Center.

This legislation will also honor those who made the ultimate sacrifice to protect our nation.  James Zadroga, a New York City Police Department Detective and member of NAPO, died of respiratory disease caused by his exposure to toxic chemicals at Ground Zero.  It is our obligation and duty to remember these heroes and ensure that survivors who risked their lives to protect us continue to receive the treatment and compensation that they deserve.

NAPO looks forward to working with members of Congress and key law enforcement stakeholders to reintroduce and pass this important legislation during the 114th Congress.

If you have any questions about this bill, please contact Melissa Nee at:  mnee@napo.org.

The following are the main tenets of the bill:

NAPO discussed this legislation at length with Senator Cornyn’s staff last Congress, and we continue to closely monitor the legislation.

We will keep our members updated on the status of this legislation.  If you have any questions aobut this bill, please contact Melissa Nee at:  mnee@napo.org.

Congress managed at the last minute on February 27th to avert a partial shuttering of the Department of Homeland Security, passing a one-week funding measure for the agency. President Obama signed it shortly before the midnight deadline.

The arrangement is expected to prolong talks about longer-term DHS funding until at least early this week.

NAPO is closely monitoring this process, and we will keep our members updated on the latest developments. If you have any questions about the funding bill, please contact Melissa Nee at:  mnee@napo.org.

JMHCP grants support innovative cross-system collaboration for individuals with mental disorders or co-occurring mental health and substance use disorders who come into contact with the justice system.  On February 18, 2015, the U.S. Department of Justice’s Bureau of Justice Assistance (BJA) released the JMHCP grant solicitation.  Applications are due April 14, 2015.

BJA is placing a priority on applications from law enforcement agencies that demonstrate a collaborative project with mental health partners to plan, implement, or expand a justice and mental health collaboration program.  Previous grants to law enforcement agencies have supported assessment and referral centers, training for officers, and information systems and technologies to improve officer and agency responses to persons with mental disorders.

NAPO expended much effort to garner support for the JMHCA during the last Congress, and was successful in building a strong bipartisan list of cosponsors in both chambers.  NAPO looks forward to continuing to work with fellow stakeholders during this Congress to pass this important legislation.

If you have any questions about the JMHCP, please contact Melissa Nee at:  mnee@napo.org.