On December 18, 2014, President Obama signed an Executive Order to create the Task Force on 21st Century Policing, and announced its members, which include NAPO.  NAPO is the only police rank and file group in the nation to have a seat on the Commission itself.   Our Treasurer, Sean Smoot, of the Illinois PB&PA, has been appointed by the President to the Commission.

Over the past week, NAPO’s Executive Director, Bill Johnson, participated in multiple conference calls with the White House and the Attorney General to discuss the goals of the Task Force.  Johnson also attended and submitted the attached written testimony for the first Task Force public hearing, which took place on January 13, 2015.  (The first meeting focused on efforts to build trust and legitimacy between police officers and the communities they serve).

Additionally, NAPO joined fellow stakeholders in a White House pre-briefing on the first Task Force hearing, and stressed the importance of including the rank-and-file perspective in future discussions.

The fact that NAPO has a seat on the Commission is indicative of the fact that the Administration and powers in Washington know who we are, and want to hear our views.  We will continue to make our voice heard as the Commission moves forward.

If you have any questions about the Task Force on 21st Century Policing, please contact Bill Johnson at:  bjohnson@napo.org.

On January 16, 2015, NAPO’s Executive Director, Bill Johnson, participated in a conference call with Attorney General Holder to discuss a new federal policy on civil asset forfeitures.  The civil asset forfeiture program allowed state and local police to seize vehicles, valuables, cash, and other monetary instruments, and then share the proceeds with federal agencies that “adopt” the seizures.  Holder’s new policy ends the practice of “adopting” state and local civil forfeiture seizures.  During the conference call, AG Holder also noted that he believes more data must be collected and reported to the federal government regarding state and local police use of force, especially when it results in death.

NAPO is very concerned about the possible loss of significant funding that could result from new DOJ policies on civil asset forfeiture, especially as state and local police are being asked to do more and more each year.

Following the teleconference, Johnson expressed these concerns to multiple news sources, and was quoted in the Washington Post and Chicago Tribune.

NAPO will continue to stay engaged on this issue, and ensure our members’ voices are heard loud and clear as policy reforms are considered.  If you have any questions about our engagement, please contact Bill Johnson at:  bjohnson@napo.org.

Justice for Victims of Trafficking Act

On January 13, 2015, Senator John Cornyn (R-TX) reintroduced the Justice for Victims of Trafficking Act.  This legislation would boost support for and protection of victims of human trafficking by increasing law enforcement resources, enhancing victims’ services, and increasing penalties in an effort to combat child sex trafficking, child pornography, sexual exploitation, and human trafficking.

NAPO worked closely with Senator Cornyn’s staff during the 113th Congress to advance this bill, which was passed by the Senate Judiciary Committee in September 2014.  NAPO discussed this legislation at length with Senator Cornyn’s staff on January 16, 2015.   We used the meeting to stress our commitment to working with the Senator to pass this important bill during the 114th Congress.

Senator Cornyn highlighted NAPO as a supporter of the bill in his press release, which is available at the following link:  http://www.cornyn.senate.gov/public/index.cfm?p=NewsReleases&ContentRecord_id=8358cac8-2ad6-4ce7-89b5-6c412731f3fa.

NAPO was also recognized as a supporter of the bill in numerous publications, including the following article:

NAPO looks forward to working with Senator Cornyn to pass this legislation.  If you have any questions about the Justice for Victims of Trafficking Act, please contact Melissa Nee at:  mnee@napo.org.

On January 8, 2015, Senate Judiciary Committee Ranking Member Patrick Leahy (D-VT) introduced bipartisan legislation, cosponsored by Senator Lindsey Graham (R-SC), to reauthorize the lifesaving Bulletproof Vest Partnership (BVP) Grant Program, a federal grant program that helps state and local law enforcement agencies purchase bulletproof vests for officers working in the field.  Senator Leahy recognized NAPO as a supporter of the bill both in his official press release on the legislation, as well as during a floor speech.  That same day, Congressman Frank LoBiondo (R-NJ) introduced a House companion bill.  On January 13, 2015, NAPO sent the attached letters of support for the bill to Senator Leahy and Congressman LoBiondo.

The BVP Grant Program has issued more than one million lifesaving vests to 13,000 state and local law enforcement agencies throughout the country since it was established in 1999.  Congress has reauthorized the program three times, most recently in 2008.  However, the program’s charter expired in September 2012 and the Senate has failed to pass reauthorization legislation despite bipartisan efforts to do so.

NAPO has worked closely with senior staffers for Senator Leahy and Congressman LoBiondo to advance this important legislation.  We look forward to continuing to work with these offices to ensure swift reauthorization during the 114th Congress.

It is important to note that NAPO continues to urge that funding for the BVP Grant Program be authorized at the $50 million level.  We are also working to ensure that failure to wear a vest shall not impact a surviving family member's ability to receive benefits under the PSOB Act.

We will keep our members updated on the status of our efforts to pass this important bill.  If you have any questions about this legislation, please contact Melissa Nee at: mnee@napo.org.

Senator Ayotte and Congressman Paulsen introduced this legislation during the 113th Congress.  NAPO immediately pledged our strong support for the bill when it was introduced during the last Congress, and worked with both offices to advance the bill. (The Senate bill passed the Senate without opposition on September 18, 2014).

NAPO is hopeful that the bill will be reintroduced, and looks forward to working with Senator Ayotte and Congressman Paulsen to pass this important legislation during the 114th Congress.  If you have any questions about this meeting, please contact Melissa Nee at:  mnee@napo.org.

On January 16, 2015, NAPO met with Senator Orrin Hatch’s (R-UT) law enforcement staffer to discuss priorities for the 114th Congress.  The majority of the discussion focused on policies related to officer-worn body camera.

NAPO continues to closely monitor new policies and legislation regarding officer-worn body cameras.  NAPO will continue to provide our members with updates as they become available.  If you have any questions about this meeting, please contact Melissa Nee at:  mnee@napo.org.

On January 12, 2015, NAPO attended the monthly National Criminal Justice Association (NCJA) Brown Bag.  Denise O’Donnell, Director of the Bureau of Justice Assistance (BJA), attended the meeting, and provided feedback on BJA’s top priorities for 2015, which include the following:

NAPO appreciated the opportunity to attend this session, and will continue to stay closely engaged with BJA.  If you have any questions about NAPO’s participation in the NCJA Brown Bag, please contact Melissa Nee at:  mnee@napo.org.

This day was used to show law enforcement officers that our citizens recognize the difficult and sometimes impossible career they have chosen, in public service to us all. Each day 780,000 police officers across our country put a badge on and go to work knowing they may face extremely dangerous situations.  Yet, they go to work anyway.  Being a law enforcement officer is not just a job, it is a calling.

Members of Congress continue to recognize members of law enforcement for their service.  On January 13, 2015, Congressman Bill Pascrell (D-NJ) provided the following statement on the House floor:

IN THE HOUSE OF REPRESENTATIVES

Mr. PASCRELL. Mr. Speaker, I rise today to recognize Law Enforcement Appreciation Day and honor our brave law enforcement officials who put their lives on the line day in and day out and keep our communities safe. The millions of state, local and federal law enforcement officers nationwide constitute both our first and last line of protection for the American people.

As a former mayor, I know how important having well-staffed and properly equipped public safety departments is to protecting our communities. Our law enforcement officials work tirelessly to protect our families and business, and I am committed to ensuring that they have access to the resources they need to uphold the public’s safety. That is why I have long been a supporter of the federal Community Oriented Policing Services (COPS) Technology Grants program as well as for the COPS Hiring program, which provides invaluable resources and technical assistance to state and local law enforcement agencies in an effort to keep our communities safe.

Finally, I want to recognize my friend, colleague and former sheriff Congressman Reichert for all his work to honor and support law enforcement officers across our country. Protecting the American people must be the number one priority of our government. It is our brave law enforcement officers who protect our streets day and night who are the very essence of our national security and deserve our utmost gratitude and thanks.

NAPO was proud to be a part of this effort, and greatly appreciates the members of Congress who continue to advocate for law enforcement officers.  If you have any questions about L.E.A.D., please contact Bill Johnson at:  bjohnson@napo.org.

On January 14, 2015, the House passed a spending bill that would fund the Department of Homeland Security (DHS) for the rest of fiscal 2015, which included controversial immigration language.

Despite swift passage in the House, the proposal is not expected to sail as easily through the Senate, where Republican leaders will have a tough time securing the 60 votes needed to send it to President Obama in its current form. And the administration has already threatened to veto the measure if it arrives with the immigration amendments.

Although the House got an early start in considering the bill, which would fund DHS beyond the February 27 expiration of budget authority, the legislation will likely linger in the Senate until next month since the chamber will likely remain consumed with debate on the Keystone XL pipeline for much of the rest of January, if not beyond.

If Senate leaders allow an open amendment process for the funding bill, as they have done so far with the pipeline proposal, consideration could easily drag up to or beyond the funding expiration date.

House Speaker John A. Boehner (R-OH) is not ruling out the possibility that the House will ultimately revert to passing a “clean” funding bill, without any immigration language, to prevent an appropriations lapse.

NAPO is closely monitoring this issue, and will keep our members updated as information becomes available.  If you have any questions, please contact Melissa Nee at:  mnee@napo.org.

On January 16, 2015, President Obama signed an Executive Order to establish a working group to review equipment acquisition by state and local law enforcement agencies.  The working group will be co-chaired by the Secretary of Defense, Attorney General, and Secretary of Homeland Security.

NAPO has discussed our views of the excess property program, also known as the 1033 Program, with numerous policymakers over the past several months.  NAPO continues to stress that the vast majority of equipment provided under the 1033 Program is defensive in nature.  Furthermore, the program enables law enforcement departments to garner equipment that they would otherwise be unable to afford.  Ending the program would leave law enforcement departments unable to equip their officers with the necessary tools to keep their communities safe.

NAPO will continue to engage the Administration and members of Congress on this issue, and keep our members updated as new information becomes available.  If you have any questions about our efforts, please contact Melissa Nee at: mnee@napo.org. 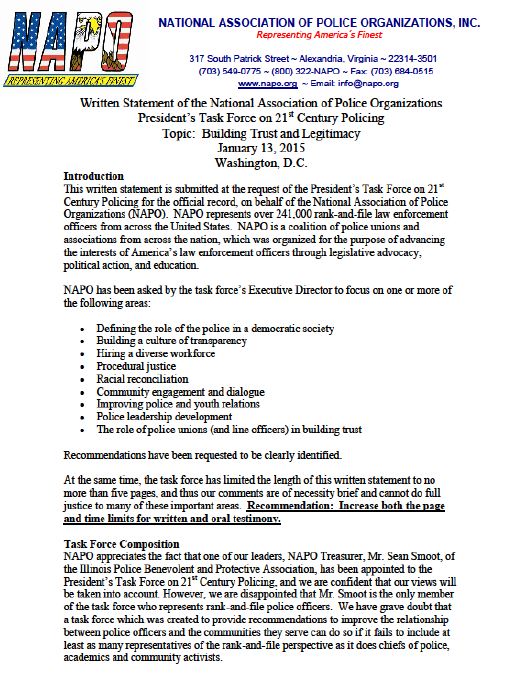 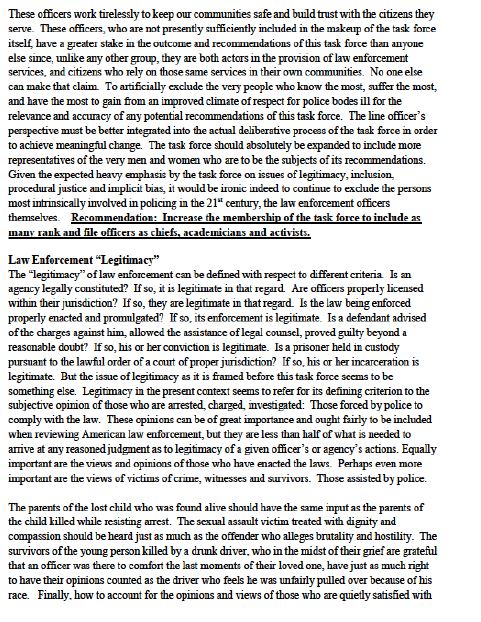 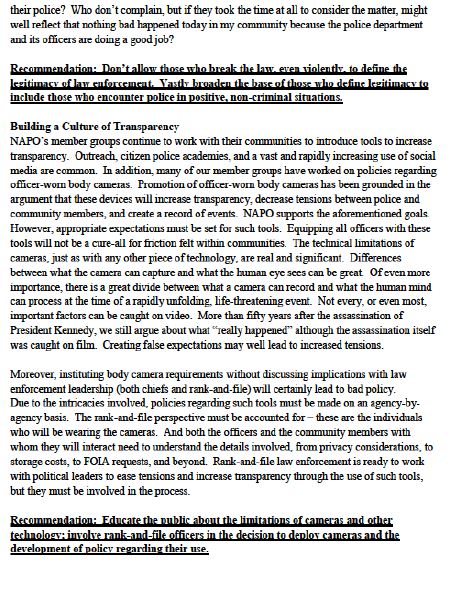 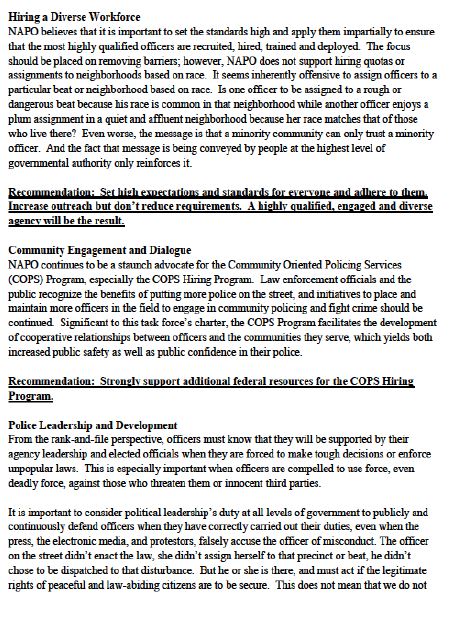 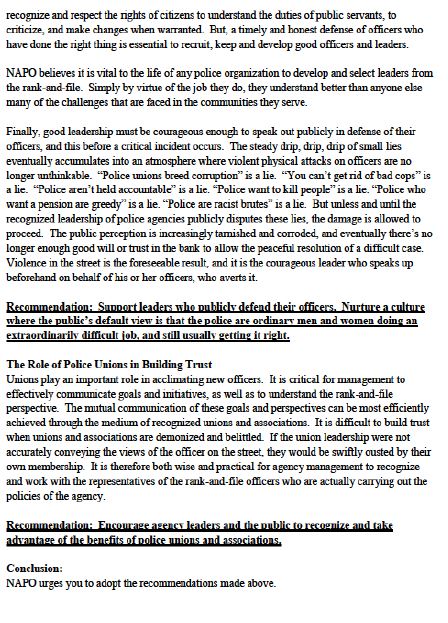 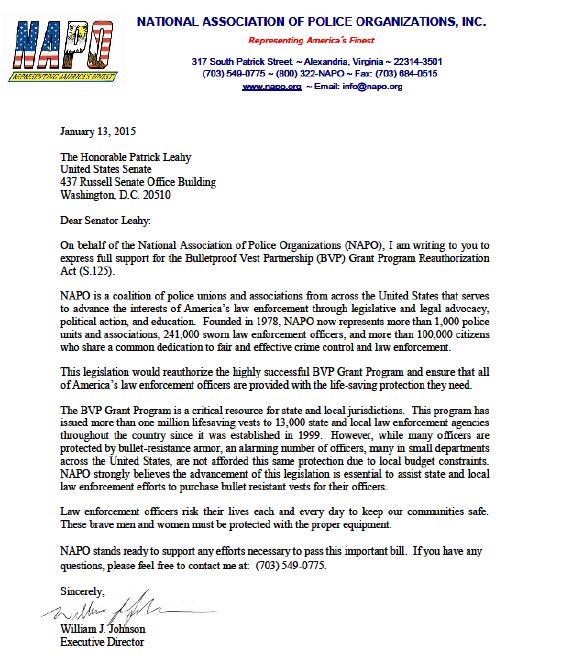 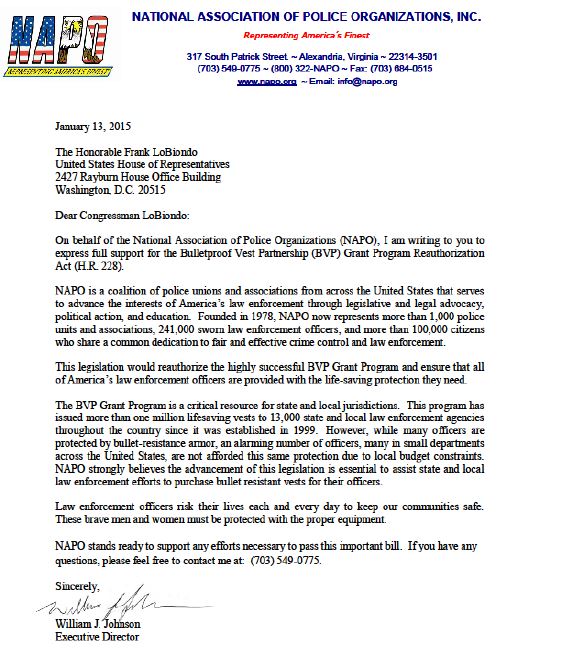